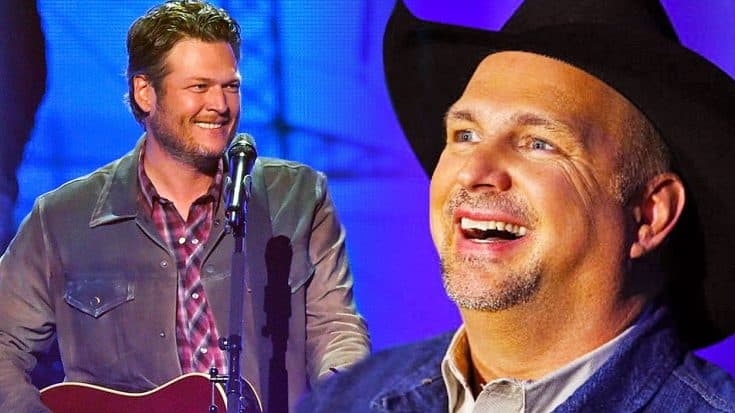 Blake Shelton has a lot of admiration for Garth Brooks, so it makes sense that the “Sangria” singer enjoys covering some of Brooks’ hit songs.

In an interview with CMT, Shelton spoke about how Brooks influenced him to pursue a career in country music:

“He’s the reason that I worked a summer and saved up to buy a black Takamine guitar with a cutaway on it. He’s that important to me.”

During a show in 2011 at a place called The Barn, Shelton decided to honor his role model by playing two of his biggest hits, “Much Too Young” and “Papa Loved Mama.”

“Much Too Young” was released in 1989, and was Brooks’ debut single. The song also peaked at #8 on the Billboard Hot Country Songs chart.

“Papa Loved Mama” was released in 1992 as the fourth single off of Brooks’ album Ropin’ The Wind. The song reached the #3 spot on the Billboard Country Charts that year.

During Shelton’s performance, he plays “Much Too Young” first, strumming along on his acoustic guitar as he sings. The crowd gets really involved in the performance, singing along and holding their drinks up in the air.

After Shelton finishes “Much Too Young” he takes a moment to retune his guitar before going into “Papa Loved Mama.” The crowd gets even more into this song than the previous one, singing so loud they almost drown out Shelton’s voice.

Shelton is clearly having fun throughout the performance, and takes a break during “Papa Loved Mama” to jam out on his guitar along with his band.

At the conclusion of the song the crowd erupts into cheers, which based on the quality of Shelton’s performance, they were very well deserved.

Watch Shelton pay tribute to his idol, Garth Brooks, during his entertaining live performance of “Much Too Young” and “Papa Loved Mama” in the video below.