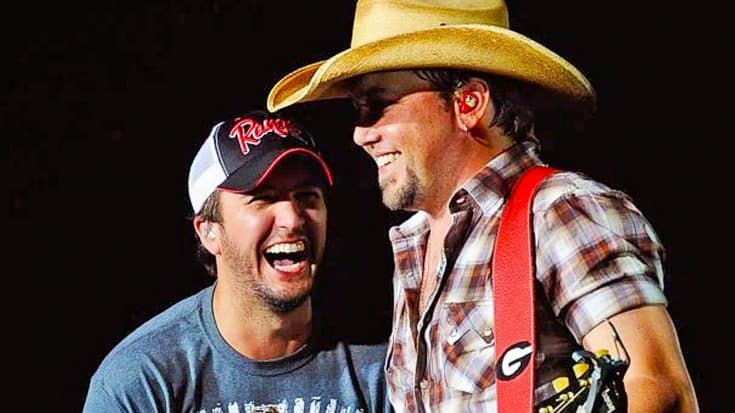 Country music fans are some of the best in the world, but there are some who just can’t help but get a little rowdy at their favorite artists’ concerts.

During a concert in Campaign, Illinois, Luke Bryan and Jason Aldean notice one fan hop over the railing and start dancing. Since the fan is clearly intoxicated, security rushes in to kick him out of the concert, but Bryan and Aldean try to help the guy out.

“Hang on. Don’t throw him out,” Bryan says to the security guard, “he’s in the spirit.”

As the fan reaches out to touch Bryan and Aldean’s hands, Aldean encourages him to calm down so he could stay at the concert, “I like your spirit bro, but go grab a beer and get back in your seat.”

But the fan ignores Aldean’s advice and keeps leaning over the railing, clearly too intoxicated to follow directions. The security guard stands nearby, frustrated with the fan’s antics.

“You’re about to get bounced,” Bryan warns.

Sure enough, the security guard escorts the fan out of the concert.

Aldean and Bryan, along with the rest of the crowd, start singing “Na Na Hey Hey Kiss Him Goodbye” as the security guard leads the fan away, trying to make light of the situation.

As the fan disappears from the concert, Aldean calls after him in support, “wish you could have seen the rest of the show brother.”

We appreciate Bryan and Aldean’s efforts to keep their fan at the concert, but in the end he was just too much of a “buzzkill” to keep around.