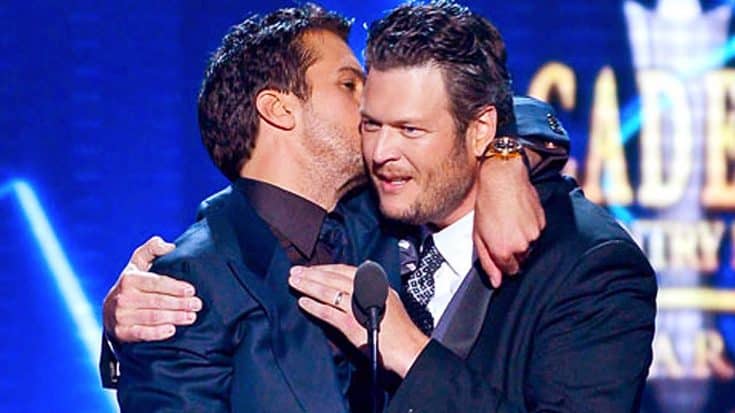 Luke Bryan had a lot of hugs to give out after winning the 2015 ACM award for Entertainer of the Year.

In a video captured after Bryan’s big win, he first embraces his ACM co-host and good buddy, Blake Shelton. Bryan is so overwhelmed with joy that at one point he actually gives Shelton a big kiss on the cheek.

After Bryan and Shelton end their bromance moment, Bryan is greeted by his other good buddy, Jason Aldean, who also shares a hug with the new Entertainer of the Year.

But it’s the next person that Bryan hugs who he holds dearest in his heart.

Wearing a sparkly evening gown, Bryan’s wife Caroline comes running at him, cheering with excitement. Bryan wraps her up in his arms and lifts her off the ground, appearing like he’s whispering something in her ear or kissing her on the cheek.

Bryan keeps ahold of Caroline for a long time, even after he puts her back down on the ground. How sweet!

Finally, Caroline nudges Bryan off to go interact with the rest of his friends, and he hugs Garth Brooks (twice!) and Trisha Yearwood, all while Caroline stands by and smiles.

But at the end of it all, Bryan returns to Caroline, placing his hand on her back as the two make their way through the cheering crowd.

Watch the video of Bryan celebrating his 2015 ACM Entertainer of the Year award win below!