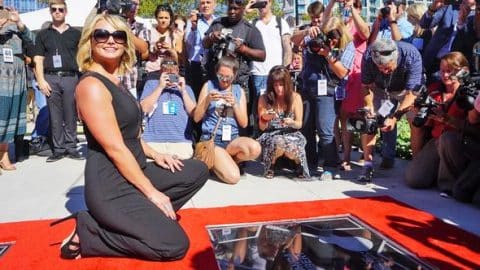 Miranda Lambert is shining brighter than ever before! Probably because she officially has her name on a star! A star on the Music City Walk of Fame, to be exact!

And rightfully so! The singer has won Grammys, and is a five-time CMA and six-time ACM Female Vocalist of the Year, and she doesn’t seem to want to slow down her momentum!

Maybe her move back to Nashville had something to do with it.

When Miranda took the stage for her acceptance speech, she was very thankful and humbled.

“Thank you so much to the City of Nashville and Music City Walk of Fame for this honor and privilege. I am proud to join a heritage of other female inductees, such as Loretta Lynn, Dolly Parton, Trisha Yearwood, Reba McEntire, Emmylou Harris and Martina McBride. This is a milestone moment that I will cherish forever. I want to congratulate my fellow inductees, Steve Cropper, E.W. “Bud” Wendell and the legendary Johnny Cash – just saying his name alongside mine, takes my breath away.”

Getting a star on the Music City Walk Of Fame today was such an honor! Thanks @dierksbentley for being there with me and the sweet words you said. Such a good friend! #cantmakeoldfriends #I❤️Nashville

Below are a few pictures of the special day! Congratulations, Miranda! She looks fierce and better than ever!

Take a listen to her latest single, “Smokin’ and Drinkin'”.