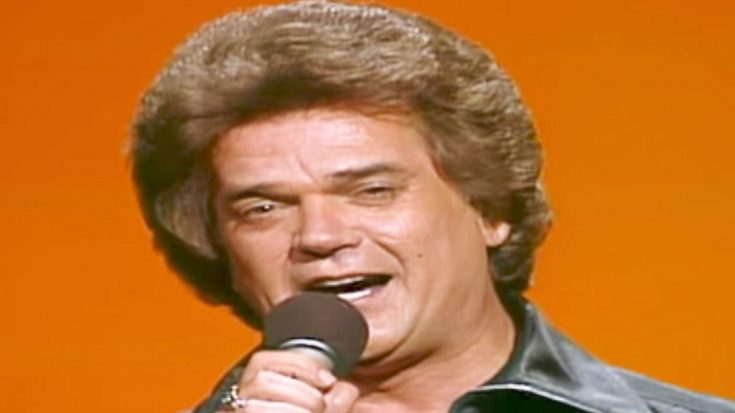 Conway Twitty is one of the most beloved and successful country artists of all time. With hits such as “Hello Darlin'” and “Love to Lay You Down,” Twitty won over the hearts of country fans far and wide.

During his lifetime, Twitty generated countless number one hits, some being duets with his longtime singing partner, Loretta Lynn. He was never made a member of the Grand Ole Opry, but he was inducted into the Country Music Hall of Fame, which is one of the greatest honors a country artist can earn.

When Twitty passed away in 1993, the country music community was devastated. Although they mourned the loss of a great talent, they also celebrated Twitty’s extraordinary life.

Twitty’s life was nothing short of interesting, that’s for sure. In fact, there’s a few things about the country legend that you may not have known before!

These seven things are only the start…

There’s no doubt that “Conway Twitty” has more of a ring to it than “Harold Jenkins.” But believe it or not, Twitty’s real name was the latter.

Twitty was born in Mississippi on September 1, 1933 as Harold Lloyd Jenkins. He was named by his great uncle, who was a big fan of the silent film actor, Harold Lloyd.

Needless to say, when it came time for Twitty to select a stage name, he moved away from his birth name for something catchy, and “Conway Twitty” was born. Hey, it worked!

2. He Had His Own Radio Show As A Kid

From early on in life, Twitty had a passion for music that he couldn’t ignore. While other kids his age likely spent their Saturday mornings sleeping in, Twitty got up to host his own radio show.

Twitty was only 12 years old when he was invited to have his own radio show on local station KFFA Radio, based out of Helena, Arkansas. After being taught how to play guitar by his grandfather and a neighborhood blues singer, the radio show was the perfect outlet for Twitty to develop his talents.

3. He Was Almost A Baseball Star

While music was his first love in life, Twitty also had a deep passion for baseball. He played the sport throughout his childhood and teen years, and actually caught the eye of a professional team.

During high school, Twitty was scouted out by the Philadelphia Phillies, and eventually received an offer to play for them. But he never joined the team. How come? Well, because after graduation he was drafted into the U.S. Army.

Twitty served in the Army during the Korean War, and continued to play music in a small band with his fellow soldiers. Once he was discharged, Twitty put his baseball days aside to pursue music.

4. People Would Mistake His Voice For Elvis’

Although we know Twitty as a country star, he first got his start recording in other genres. After he heard Elvis Presley‘s song “Mystery Train,” Twitty started to write rock and roll songs, and even went to the famous Sun Studios in Memphis to work on his sound.

Twitty experienced great success with his rockabilly tune “It’s Only Make Believe” which was a number one hit on the Billboard Hot 100. But many people who listened to the song swore that Presley was the one singing it.

“The King’s” voice sounded similar enough to Twitty’s that listeners figured the name “Conway Twitty” was just a pseudonym of his!

5. He Inspired The Creation Of A Broadway Character

You’ve likely heard of the Broadway musical Bye Bye Birdie before, but did you have any idea that one of the main characters was partially inspired by Twitty? Set in 1958, the musical debuted in 1960, and served as a form of satire about society at the time.

One main event referenced in the musical was when Elvis Presley left the country after he was drafted into the Army. This plot is carried out through a character named Conrad Birdie, who is not only based on Presley, but another rock singer who was popular at the time…Twitty. In fact, Birdie’s name is a play off of Twitty’s.

6. Some Country DJs Didn’t Want To Play His Songs

Although he sang pop and rock, Twitty’s heart was always in country music, which is why he switched to recording it in 1965. We’d say it was a smart move, because he’s now regarded as a legend in the genre that he loved.

However, country DJs were initially hesitant about playing his songs. Reason being? It wasn’t because they doubted Twitty’s talent, but rather because he already had a reputation as a pop and rock star.

They took a chance on Twitty anyway, and it obviously worked out. But when Twitty released his song “You’ve Never Been This Far Before” in 1973, some DJs refused to play it, deeming it too risque. Even then, the song was still went on to become a number one hit.

As you’ve likely noticed when you attend a concert, the artist will often address the crowd before each song, sometimes telling a little story about it. But this is something that Twitty shied away from early in his career, and as you would expect, it was quite unusual.

Not only did Twitty refrain from speaking on stage, but he also did not perform encores and never appeared for interviews or television shows. This is something that his duet partner Loretta Lynn found odd, telling one book author that his behavior on stage was strange. She encouraged Twitty to try talking on stage, and he eventually had a change of heart.

By the end of the 1980s, Twitty broke out of his shell by making music videos, and he even did a few interviews and television appearances.

There’s so much more to the man behind some of country music’s greatest songs, as we’re sure you’ve now learned. Which of these facts about him surprised you the most?