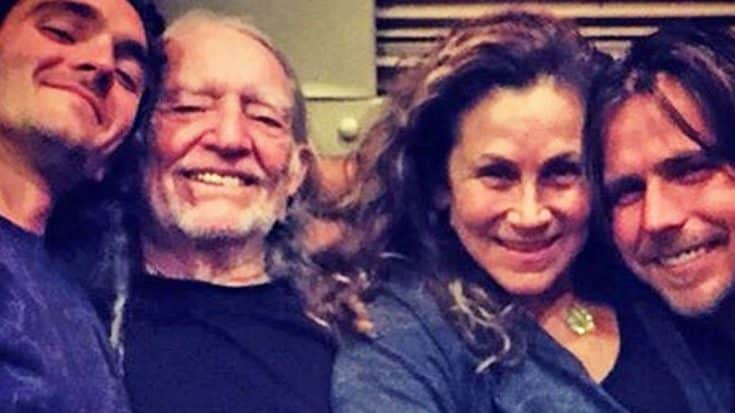 Lukas Nelson took to his band’s Facebook to put worries to rest about his dad, Willie Nelson.

Willie revealed that he is going to have to reschedule the first half of his Django and Jimmie Tour tour dates with Merle Haggard due to a health issue. All that was known at the time of the announcement was that the issue is not life-threatening, but that Willie will need to take several weeks to recover.

Lukas wanted to keep fans updated on his father’s health, posting a picture with him, his mom Annie D’Angelo, and Neil Young following Young’s recent concert in LA.

Mom and dad came and saw us with @neilyoung the other day..nothing better than all being together in one place! #family

Posted by Lukas Nelson & Promise Of The Real on Wednesday, October 14, 2015

Lukas was also performing with Young in LA with his band Lukas Nelson & Promise of the Reel.

Even though he’s trying to enjoy his time in LA right now, Lukas wants to make sure that his dad’s fans know that their outpouring of support is much-appreciated.

They have little pictures of the LA Forum on the M&Ms at the #laforum In other news, thanks for the prayers and love for dad, his health issue is minor and he’s doing great, love to all…

Posted by Lukas Nelson & Promise Of The Real on Wednesday, October 14, 2015

We’re happy to hear that Willie’s doing well, despite the health issues he has been facing. Our thoughts and prayers are with Willie in hopes of a speedy and full recovery.