Blake Shelton Stops Show, The Reason Why? He’s Never Seen THIS Before

By Jennifer Pernicano on October 15, 2015
Advertisement 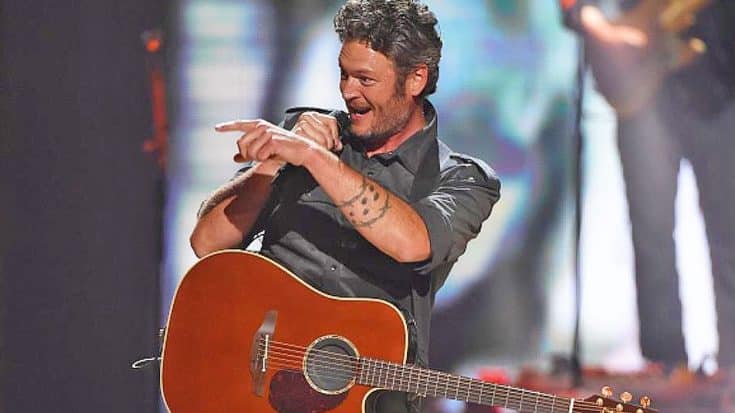 You’d think a seasoned artist like Blake Shelton has seen just about everything while on stage. Guess not!

Even though this is an older video from a 2013 performance, we love when Blake isn’t afraid to be himself!

After performing one of his signature songs, “Ol’ Red“, he stopped his concert to tell his audience about something he saw on stage. He pointed out a married couple in the front row, and called the wife, “awesome.”

“It’s not that often that I see something from the stage that I’ve never seen before,” he tells them. “I was tryin’ to be up here doing ‘Ol’ Red‘, bein’ an outlaw, you know, killin’ people, goin’ to jail, all that stuff. I look down here I see you whisperin’ to her.”

He then tells the audience the husband was dancing provocatively with his wife and kissing on her during the song. While that is usually normal at a country concert, Shelton was baffled because of the song he was singing.

The song is about a man who killed his wife’s lover after finding out she was having an affair. The man is sentenced to jail for 99 years and becomes in charge of the jail’s bloodhound, named “Ol’ Red“, who is used to track escaping inmates. The dog has caught every inmate who has attempted to escape during the man’s sentence. The man eventually escapes because he lured to dog to a female dog when he tried to escape.

The song is not quite a love song, but this couple was treating it like it was, which is why Shelton was so shocked! He suggested he sing a different song to her, and begins singing the lyric, “My oh my, you’re so good looking.”

Shelton loves interacting with his fans and this just proved it even further. Watch the video below to see for yourself!