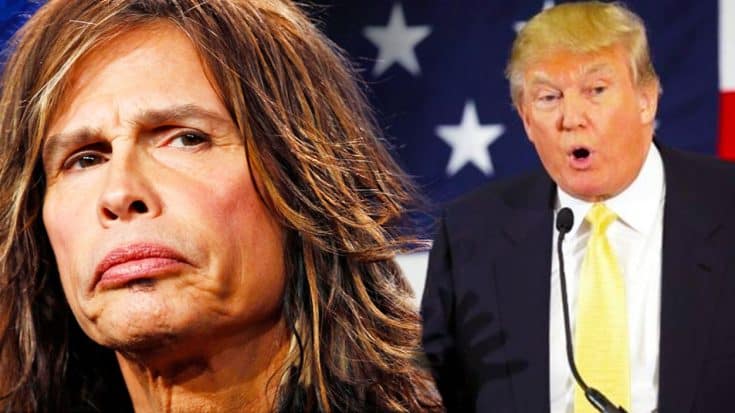 Donald Trump can “dream on” all he wants about using Steven Tyler‘s song at future campaign events.

On October 10, Tyler issued a cease and desist letter to Trump due to his use of the song “Dream On” during his events for his presidential campaign. The song, originally released in 1973 by Tyler’s band Aerosmith, was also written by Tyler himself.

That is why Tyler is issuing the letter to Trump, because he did not get permission from Tyler to use the song.

Tyler wants to make it clear that he isn’t doing this because of any personal or political issues he has with Trump. His attorney, Dina LaPolt, released a statement about the true reason why Tyler issued the letter:

“Steven works tirelessly with both Republicans and Democrats regarding copyright reform and his position has always been consistent regarding copyright and intellectual property. Simply, one must get permission from the music creators. Steven wrote 100% of ‘Dream On,’ and this is about the un-authorized use of his property.”

The issue is complicated by the fact that this is now the second time that Trump has been warned about using Tyler’s song in his campaign. According to the letter, he either has to stop playing the song at his events, or he has to provide proof that he has permission to use the song.

Trump to took Twitter to respond to Tyler on Wednesday, claiming that he does indeed have the legal rights to the song.

“Even though I have the legal right to use Steven Tyler’s song, he asked me not to. Have better one to take its place!” Trump said.

Tyler’s song isn’t the only one that Trump has used without permission. He also managed to anger rock band R.E.M by playing one of their songs at a Washington D.C. rally without seeking their permission to do so.

To save on future legal issues, hopefully Trump got the proper permission to use whatever song he’s selected to take the place of “Dream On.”

Although Tyler became famous for his work with Aerosmith, the rocker has recently been working on a solo country album. Tune in below for Tyler’s music video for his first country single “Love Is Your Name.”