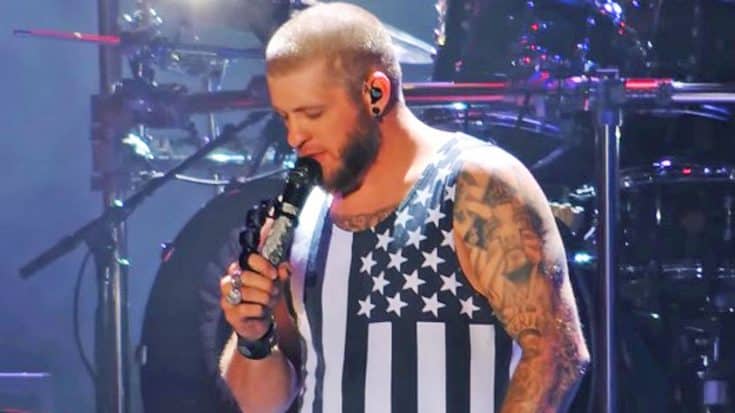 Brantley Gilbert has always made it clear that he has a deep respect for our troops. So like many people across the nation, Gilbert was deeply saddened by the deaths of U.S. Marine Gunnery Sgt. Thomas Sullivan, U.S Marine Staff Sgt. David Wyatt, U.S. Marine Sgt. Carson Holmquist, U.S. Marine Lance Corporal Skip Wells and U.S. Navy Petty Officer Randall Smit, who were killed during the July 2015 shootings in Chattanooga, Tennessee.

Gilbert wanted to help out the people of Chattanooga in any way that he could, so when he learned that the city planned to host a week-long celebration in September, he joined in to perform a free concert.

The celebration, called Chattanooga Unite: A Tribute On the River, included a parade and fireworks, as well as Gilbert’s concert.

Prior to the start of the concert, Gilbert asked for a moment of silence in honor of the victims. But what happened next wasn’t even something that Gilbert had expected

“I really felt led to have a moment of silence, and that carried into a prayer,” Gilbert says in an article for Rare Country.

Gilbert says that even though he knew there were people there with different religious backgrounds, everyone remained quiet and respectful during his prayer.

The main focus of Gilbert’s prayer was for everyone to find strength and healing during such a sad time:

“We ask for comfort, we ask for healing, and we ask you to bless the families of those we’ve lost, all those that we’ve lost to the good fight.”

Gilbert feels that his performance at Chattanooga was one of his most rewarding, and he is grateful to be in a position to be able to help others through music.

“God blessed me with a platform a lot bigger than I need,” Gilbert says “I don’t require a lot of spotlight. I don’t really know what to do with it. I just live my life and write songs.”

Watch Gilbert share his prayer for the people of Chattanooga in the video below.