Brad Paisley Puts Blake Shelton ‘On Blast’ For Participating In Pageants As A Kid! 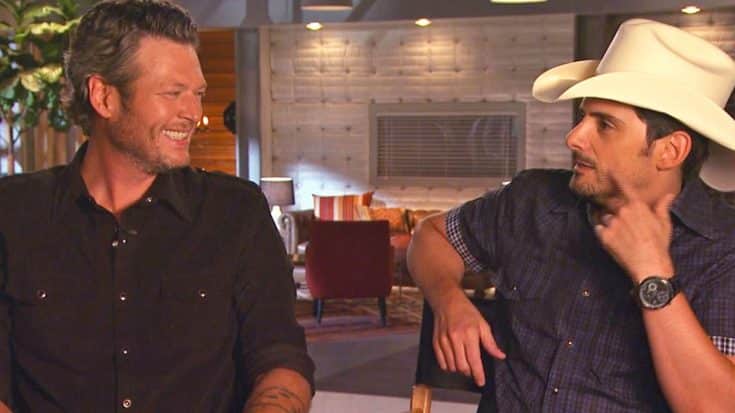 After spending so much time together, the coaches, advisers, and contestants on The Voice turn into one big, funny, family.

An exclusive digital clip on The Voice YouTube channel features outtakes from the first week of battle rounds for the show’s current season.

In another outtake from the battle rounds rehearsals, Team Blake powerhouse Barrett Baber asks his coach, Blake Shelton, and adviser, Brad Paisley, if there is anywhere in the song they want him to “flex a little.”

Even though Baber’s battle round opponent Dustin Christensen knows what Baber meant, he still can’t help but crack a joke.

“Don’t flex,” he says, which prompts a lot of laughter from Paisley, and also a random statement.

“Blake used to be in pageants,” Paisley says. “I don’t know why I brought that up. It’s kinda like flexing.”

Shelton has actually been pretty open about his pageant past, sitting down with Entertainment Tonight to tell them why his mom had him participate in them as a kid:

“There was a talent portion of the pageant. In order for me to sing in the pageant, like my mom wanted me to, I had to do the evening wear and all that crap.”

In the outtake clip from The Voice, Shelton takes Paisley’s teasing all in good stride, making a joke of his own, “I’m going back to that, I’m going back to pageants,” he says, as everyone else laughs.

Baber takes a moment to collect himself before getting in the last word, “Whatever pays man,” he says.

We know that Shelton did pretty well back in his pageant days, but we really hope that he’ll just stick to singing and coaching on The Voice.

Watch the exclusive outtakes reel from The Voice‘s first week of battle rounds in the video below.