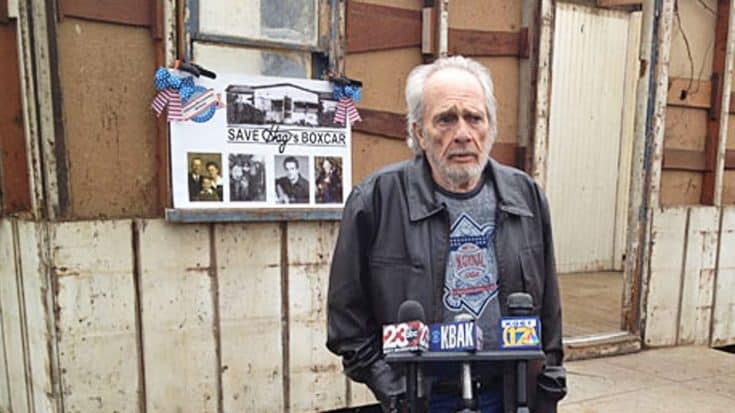 What an emotional walk down memory lane…

So many memories fill the homes we grew up in, and everyone remembers those special times. Country stars are no different.

The legendary, Merle Haggard, was raised in a rural part of Bakersfield, California. He had not been back to his childhood home since 1972, but in the emotional video below, Haggard returns home.

Haggard was born in 1937 and grew up in the famous “Oildale Boxcar“. The boxcar was transformed into the family home by Haggard’s father, James Haggard, during the Great Depression.

Below is a photo of the Haggard home. In early 2015, Haggard returned to the family home before it was taken apart, piece by piece, in order to persevere the famous home. The home is currently on display at the Kern County Museum.

Haggard told KGET (via kerngoldenempire.com) about his emotional homecoming. He said,

I remember the alley, I remember the railroad tracks. There was a lawn here and we had trees on both sides. Nothing here looks like it did then –this was a neighborhood that wasn’t old like it is now.

This was a very special moment for the country star, and we can only imagine the emotion he felt walking down memory lane.

Check out the emotional homecoming below.