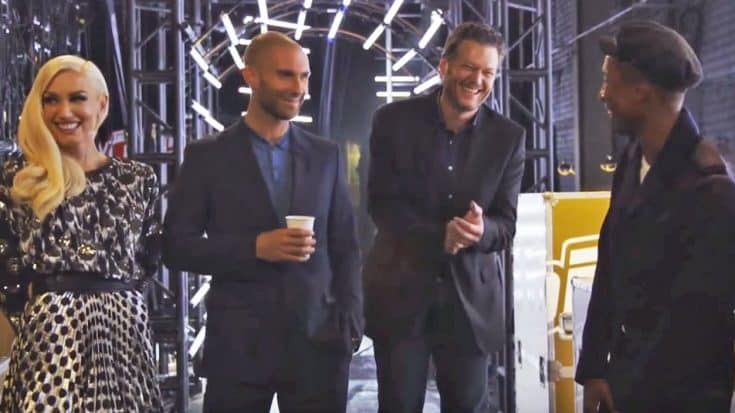 The Voice judges are full of surprises, and you can never be too sure what they are going to say….

Blake Shelton, Adam Levine, Gwen Stefani, and Pharrell Williams are quite the group. They are full of energy and jokes, and we just can’t get enough of them!

The hilarious clip below features some of the funniest outtakes from this season of NBC‘s The Voice.

Adam gets confused by his identical twin contestants, while Gwen has to explain the meaning behind ‘Bohemian Chic’ to one of her team members.

The funniest moment of all is when Blake gets confused about today’s pop music. His mentor, Brad Paisley, calls one of Blake’s team members Harry Styles and a confused Blake agrees, “Yeah, you do have a hairy style!“

Of course that is not what Brad meant, and he immediately called Blake out on his mistake. Blake defended himself saying, “He’s an actor, isn’t he?” Blake’s team members, along with Brad, were baffled by his statement and started laughing uncontrollably!

Again, Blake defended himself by saying,

Oh I thought he may have been in one of those ‘Twilights’ or something like that. I’m too old for his conversation.

Blake is TOO funny!

See the rest of the hilarious outtakes below and we’re sure y’all will be laughing out loud!