Toby Keith Has Emotional Meet And Greet With Wounded Warriors

By Jennifer Pernicano on October 23, 2015
Advertisement 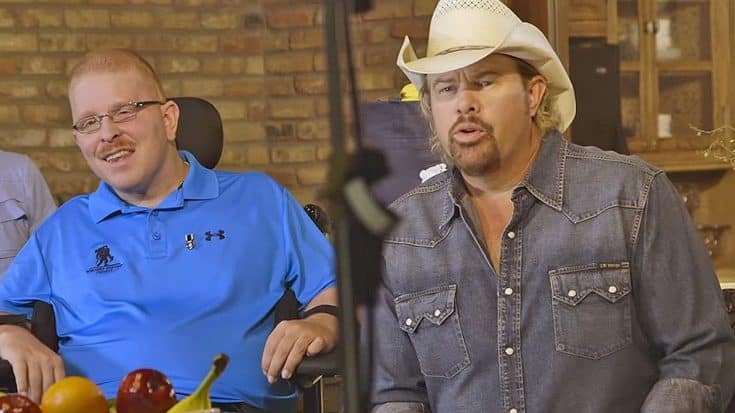 Toby has always been very open about his support of the military, but his support goes way beyond playing shows overseas for our brave men and women.

He teamed up with the Wounded Warrior Project (WWP) recently for their “Believe In Heroes” campaign. For this particular campaign, Toby filmed a commercial with a few of the veterans who benefit from WWP.

The commercial he helped film will air for the first time on October 24th. In the commercial, he speaks about his support of Wounded Warriors and how the organization works tirelessly to help our nation’s veterans who have been injured both physically and mentally.

This behind-the-scenes video shows Toby meeting a few veterans who benefit from WWP for the first time and spending time with their families. While Toby is thankful to be able to be apart of this special organization, the families feel they are the lucky ones.

“We are so glad that he is giving his name that is so easily recognizable to stand up for Wounded Warriors so that people will understand and listen and maybe help out,” said Christine Schei, whose son Erik was wounded in Iraq.

U.S. Air Force Captain Mary McGriff wants, “to give him a big thanks for doing what he is doing because to take time out of his schedule and to actually be one of the faces of the Wounded Warrior Project, to help us, is also priceless.” Captain McGriff receives treatment from WWP for for post-traumatic stress disorder.

Toby says, “We believe in heroes.” And we do too. Take a look at