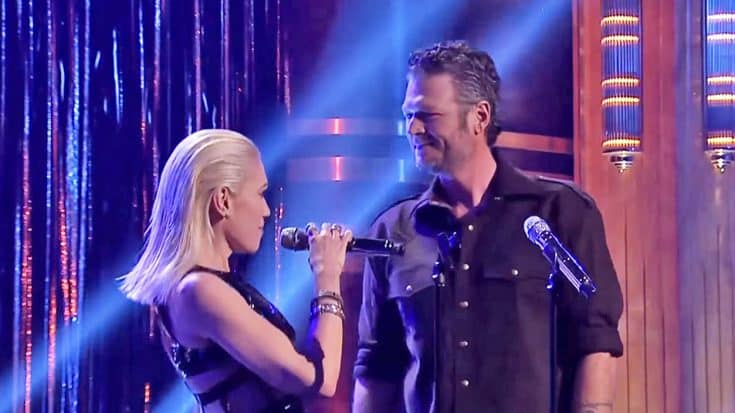 The coaches of NBC’s The Voice had no idea what to expect when they stepped on stage during the October 27, 2015 episode of The Tonight Show with Jimmy Fallon. Blake Shelton, Pharrell Williams, Adam Levine, and Gwen Stefani stepped up to play a game of “Spin the Microphone”. The results were entertaining!

Nothing like it’s cousin, “Spin the Bottle”- “Spin the Microphone” is designed to have players take turns spinning the mic on a board with their names. When the mic lands on a name, a card is drawn with the name of a song written on it. The chosen name has to either sing the song themselves or chose another player to belt out the tune.

There were a few moments that the coaches really showed their versatility. Levine had the honor of singing a somewhat monotone version of Britney Spears’ “Oops!… I Did It Again”, and Shelton gave his all on the classic “YMCA”. However, it was the duet between Stefani and Shelton that really caught everyone’s attention.

After both coaches announced their divorces in July 2015, the rumor mill began to spin about a possible love connection. Neither Stefani or Shelton have confirmed these allegations, but they did sing the sultry, new “Hotline Bling”. The tabloids will have fun with that one!

See the entire clip below to watch all of the hilarious moments. Would you turn your chair for any of these performances?