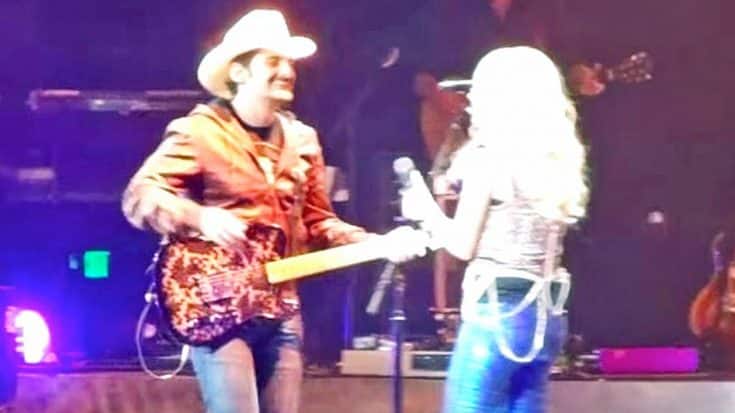 Besides serving as CMA co-hosts, Paisley and Underwood have also recorded a duet together, called “Remind Me.”

During a 2012 concert in Nashville, Tennessee, Underwood chose to perform the song on her own, but planned on having Paisley join her for a virtual duet. Paisley was supposed to show up on the video screen on stage, but he had a different idea in mind.

Underwood appears confused when she turns to look at Paisley on the screen, because even though she can hear his voice, she can’t see him.

That’s because much to Underwood’s surprise, Paisley was waiting backstage.

Underwood is so happy to see Paisley that she knocks his cowboy hat off his head when she hugs him. She’s also surprised speechless, and unable to sing her part of the song for a while as a result.

The crowd is certainly not speechless after Paisley makes his appearance. As soon as Paisley shows up on stage the crowd bursts into excited cheers, and they don’t let up for nearly 30 seconds afterward.

Eventually, Underwood regains her composure and is able to join Paisley in order to finish delivering an incredible performance of their hit duet.

Watch Paisley pull off his huge surprise in the video below!

If anything, this video just serves as further proof that awesome things always happen whenever Paisley and Underwood share the stage.