Craziest Rumor Blake Shelton’s Heard About Himself? Adam Levine Has The Answers! 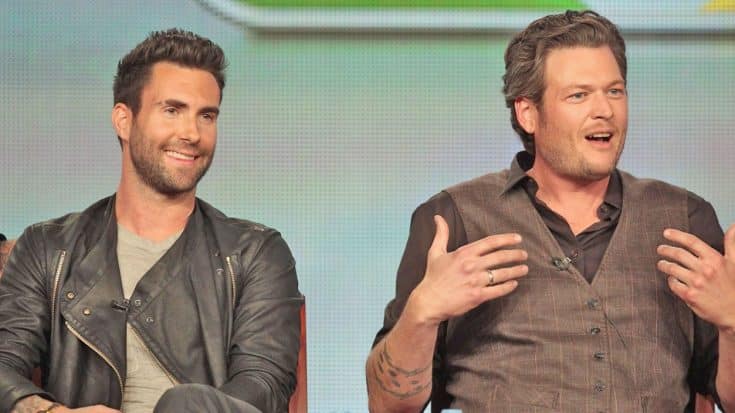 Taking a brief break before the ninth season of NBC’s The Voice resumes with their ‘live show’ segment, all four red-chair coaches get real with The Today Show and Matt Lauer.

Blake Shelton, Adam Levine, Pharrell Williams, and, of course, Gwen Stefani all sit around a table trading jokes and talk about the successes of the show and what’s happening for them individually.

Lauer begins talking with Blake about his recent divorce and noting “you tweeted ‘the stuff I read about myself blows my mind’ to your 14 million followers. What’s the craziest rumor you’ve heard about yourself?”

Blake responds almost overwhelmed “Oh my gosh! Literally I don’t know. I need to go to the newsstand!”

Even though Blake didn’t have a response…Adam did!

“I’ve heard that you were nice.”, Adam added. To that, Blake completely denied it. “That’s ridiculous.”

“I heard that you were super-duper talented” Adam went on.

Blake got all skeptical with Mr. Levine narrowing his eyes and giving a solemn “Mhmm!”

Later on, Lauer turns to Adam for some details about his recent “Voice” episodes, asking “What’s with the hair? You went bald for this season, right?”

Wisecracking Blake was at the ready for this and didn’t waste a second to send a jab or two Adam’s way.

Blake warms up to Adam with a smile, saying “I’m glad I have a friend.”

The hilarious banter between these four coaches continues on when they start talking about the host, Carson Daly.

Watch the video below to see Blake and Adam’s dueling wits!