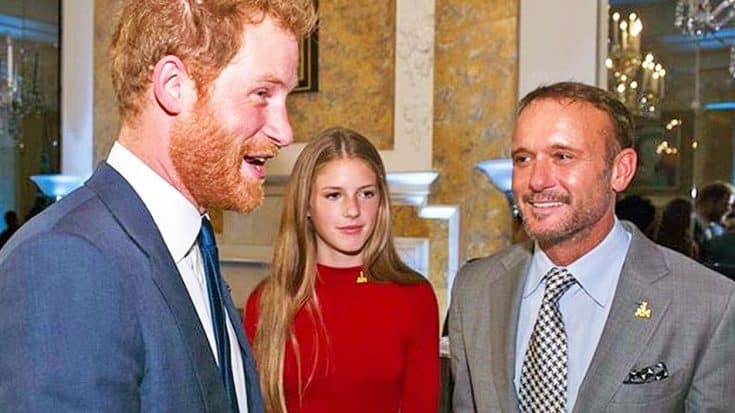 After a successful career spanning across three decades, Tim McGraw has earned his status as one of country music’s royalty.

But recently, McGraw and his daughter Maggie had the opportunity to meet true royalty, and all for a good cause.

Prince Harry made a visit to Washington D.C. on Wednesday to talk about the upcoming Invictus Games, an international sporting event for wounded military veterans. The Games were started by Prince Harry himself in 2014, and will take place for the next time in Orlando, Florida.

McGraw, Maggie, and his wife Faith Hill all had the chance to meet Prince Harry during a reception at the British ambassador’s residence.

The next day, McGraw took to social media to share a photo from the evening. McGraw smiles as Prince Harry talks, while Maggie stands by, looking all grown up in a bright red dress.

McGraw posted the same picture to Facebook, elaborating a little more in the caption as he encouraged his fans to support the Invictus Games:

“Great day yesterday with Prince Harry and Maggie to help launch the‪#‎InvictusGames‬ 2016. Proud to support his great work to help the wounded, ill and injured Service men and women. If you want to find out more, check out: http://invictusgames2016.org/“

McGraw has always been a strong supporter of servicemen and women. Two years ago, he partnered with Chase Bank and Operation Homefront to provide renovated, mortgage-free homes to veterans and their families.

Watch the video for McGraw’s Operation Homefront PSA below.

Our hats are off to McGraw for all he does to help our nation’s veterans.