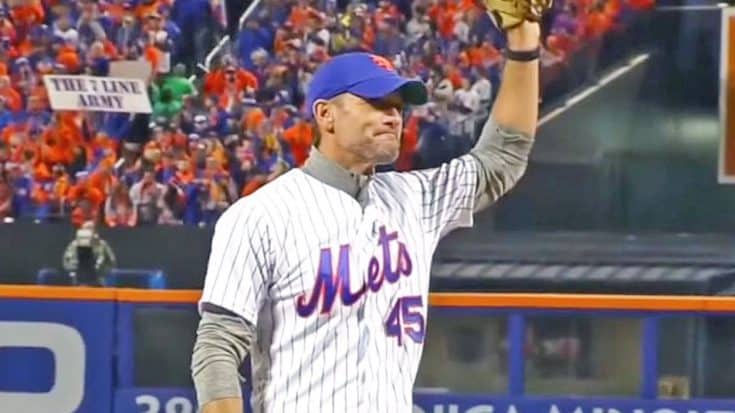 Tim McGraw has a lot of fond memories of his father, Tug, particularly when it comes to his love of baseball.

Tug was a relief pitcher for the New York Mets, and was part of the 1969 championship team. After having a legendary baseball career, Tug passed away in 2004 due to a brain tumor.

On Saturday, Tim got an incredible opportunity to honor his father in the best way possible.

During the fourth World Series game on Saturday, Tim had the honor of throwing the ceremonial first pitch for the Mets.

In an interview with ET, Tim said he was excited to be able to play such a big part in the game, and to honor his father in such a way.

“This is cool. He would really enjoy this,” Tim says.

So is Tim as good of a pitcher as his father? Well according to his wife Faith Hill, he didn’t do too bad.

“She said I did alright,” Tim says. “She said I still got a little bit of arm left.”

Besides all of the memories from Tug’s baseball career, Tim also has another little something he can hold on to that reminds him of his father.

“I have a ’69 Mercedes that my dad bought with his bonus check that he got from the ’69 Mets, and I still have that,” Tim says. “My little brother Mark had it. We fixed it up, and now I’m driving it.”

Tim shared a picture of him riding in the Mercedes on Instagram, captioning the photo “Honored to represent the @mets / McGraw legacy throwin out the first pitch game 4 tomorrow night.“

Watch Tim throw the ceremonial first pitch at the World Series in the video below.

We’re sure that Tug would be so proud of his son if he were here to see him today.