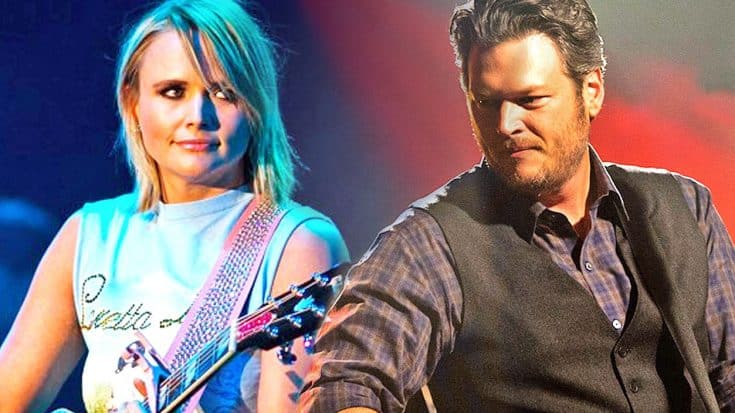 Last week, Blake Shelton gave his buddy and CMA Awards host Brad Paisley full permission to go ahead and joke about his divorce with Miranda Lambert at the upcoming CMA Awards.

Shelton said he knew Paisley and his fellow CMA Awards host Carrie Underwood had to joke about his divorce, otherwise they wouldn’t be doing their jobs.

“You have to address the elephant in the room. Okay, dude, I will go sit there and let you kick me in the face a few times. I know it’s coming, you know,” Shelton said.

Since then, Paisley and Underwood hosted a press conference where they answered fan questions. One of the questions asked was whether or not the pair would joke about Shelton and Lambert’s divorce during the CMA Awards.

Their answer? Paisley said that the divorce is definitely on the table as something they will joke about during the CMA‘s:

“I will say it’s very admirable that Blake went on Seth Myers and said ‘Bring it!’ So we will! He and I have had a few little conversations here and there. He’s not someone who’s concerned at all quite honestly. It’s really refreshing.”

Even though Shelton gave the go-ahead for the divorce to be joked about at the CMA’s, many can’t help but wonder what Lambert thinks about the whole ordeal.

Paisley and Underwood have been praised for being able to respectfully joke about tough topics in the past, so hopefully that will be the case if they do chose to go forward with joking about Shelton and Lambert’s divorce at this year’s CMA‘s.

Watch the full press conference with Paisley and Underwood in the video below.

The CMA Awards will air on Wednesday, November 4 at 8|7c on ABC.