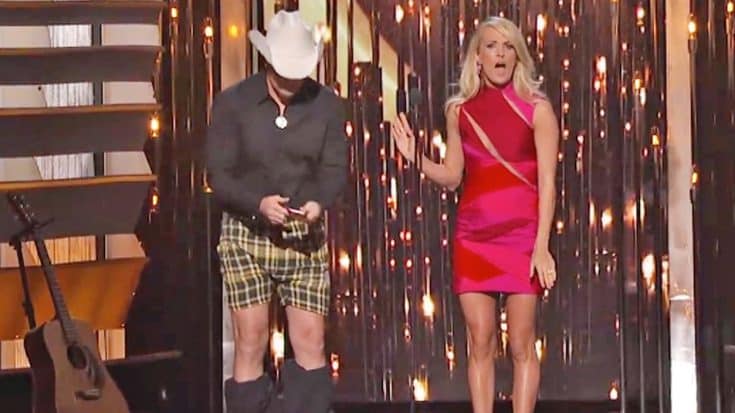 The CMAs are full of surprises… you can never be too sure what’s going to happen next!

This year, country legends Carrie Underwood and Brad Paisley were chosen to host the 2015 CMA Awards, and they were a perfect pair!

During the duo’s opening monologue, Carrie began expressing her excitement for the upcoming show.

A thrilled Carrie said, “We just have the best show lined up for you! You’re not going to believe it, some of the best… WHOA, WHOA!!”

She was blown away to see Brad taking off his jacket… his belt… and then his pants?!

Shocked, Carrie said to her co-host, “What.. what are you doing!?“

While holding his phone out in the “selfie” position, Brad responded,

We talked about this! This is the naked host selfie moment!

Carrie was confused as ever, saying “Why!? Why?!” as Brad tried to reason with her, “I don’t know! Miley sets the bar, and we try to reach the bar.“

But Carrie put her foot down, and put Brad back on track,

Put your phone away, put all that away, we’re going to talk about this later but right now just read the teleprompter.

And he definitely listened! Brad began reading the teleprompter and the two introduced the show’s first presenters, Steve Martin and Edie Brickell.

Check out the hilarious moment below.