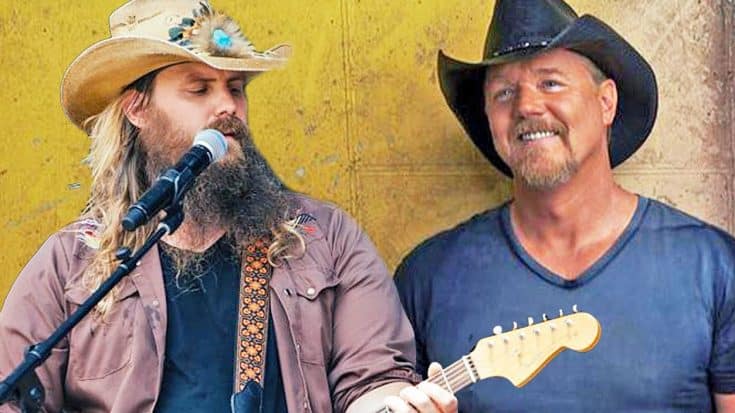 After Chris Stapleton blew away the CMA‘s with his performance of “Tennessee Whiskey” and “Drink You Away” alongside Justin Timberlake, the main thing people kept asking is “who is he?”

Well as Trace Adkins reveals, he has always known about Stapleton, and he’s a fan.

Even though Stapleton just started his solo singing career in 2013, he’s not a newbie to the music industry. As a songwriter, he’s crafted songs for some of country music’s greatest artists, including George Strait, Luke Bryan, and even Adkins himself.

Adkins says that Stapleton’s multiple talents as a singer and songwriter are what make him a force to be reckoned with.

“Chris, he’s the whole package: He’s a songwriter and unbelievable singer…that guy is one of the best singers I’ve ever heard, period,” he says.

Stapleton didn’t just take over the CMA‘s with his history-making performance. He was also the night’s big winner, taking home three awards, including the Male Vocalist of the Year Award.

Adkins was particularly pleased to see that Stapleton won that award in particular, saying he is finally getting the recognition he deserves.

“[The award] reflects what everybody else in this town, what we’ve all known for a long time. That guy is a super-talented guy, and it’s really good that he got that recognition.”

Watch part of the CMA performance that helped Stapleton achieve that much-deserved recognition in the video below.

We agree with Adkins, we’re glad that a brighter spotlight is finally shining down on Stapleton!