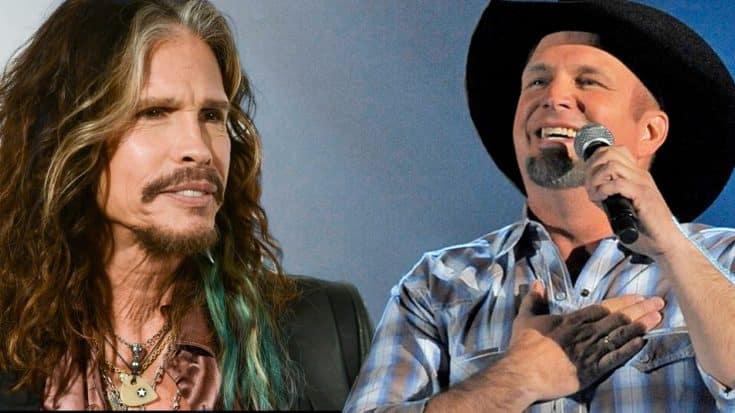 26 years ago, Aerosmith launched their supersonic hit “Janie’s Got A Gun”. Written by Steven Tyler and Tom Hamilton, Steven had a melody in mind for nine months until a headline inspired him to rework the song to be about child abuse.

In the last few weeks, Steven has been teasing a giant announcement via social media and even roping fellow country stars in on the announcement by sending them mysterious gifts.

Both Carrie Underwood and Garth Brooks took to Twitter to thank Steven for sending them a custom microphone stand wrapped in colorful scarves (just like Steven’s own) and posted with the hashtag #IsThisThingOnST and #Nov9. Along for the ride, Zac Brown Band opened up one of these super unique gifts in a photo collage on Facebook.

Thanks for the awesome mic stand, @IamStevenT! Can’t wait to see what it’s for… #IsThisThingOnST #Nov9 pic.twitter.com/CDAXMhRMkB

Wow!!! Just got this really cool mic stand in the mail from @IamStevenT. Amazing!!! Can’t wait to see what it’s for #nov9 love, g

Got off the bus and discovered Steven Tyler sent me an awesome gift! Incredibly happy to celebrate his efforts to spread support of janiesfund.org. #IsThisThingOnST #JaniesGotAFund

All of this started the train moving for Steven’s recently-announced humanitarian effort: Janie’s Fund. In a press release, Steven talked about what moved him to create the charity.

“As a father and grandfather, I want to focus my energy on things that really matter and leave behind something else in this crazy world along with my music.”

“I am starting Janie’s Fund to give a voice to the millions of victims who haven’t had one and encourage everyone to join me on this mission.”

Janies Fund will partner with Youth Villages and work diligently to “support proven programs that have demonstrated effectiveness in addressing the trauma of sexual abuse in children and to expand these services to help even more girls.”

Check out Steven’s announcement in the video below, and click the link for more information on Janie’s Fund!