By Miranda Raye on November 10, 2015
Advertisement 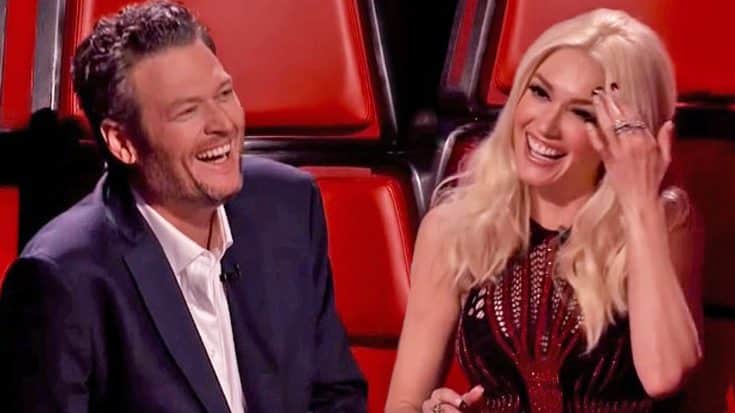 As the first live show for season 9 of The Voice approached, many fans wondered whether Blake Shelton and Gwen Stefani‘s budding romance would be addressed.

Even though there was no actual mention of their relationship, viewers had the chance to see a few flirtatious moments between the two coaches, such as when Shelton lavished praise on Stefani for having a good team, or when Stefani giggled at one of Shelton’s jokes.

Of course, Adam Levine couldn’t resist teasing both of them, mimicking Stefani’s giggle and drawing a lot of laughter from the audience.

But those are all moments that viewers got to see on TV. As revealed in clip from Entertainment Tonight, Shelton and Stefani were more openly flirtatious when the cameras weren’t rolling.

Their first flirty moment of the night was when Stefani made her entrance, and after Levine gave Shelton a playful nudge, he rushed forward to wrap Stefani up in a big hug. As to be expected, the crowd cheered like mad when they embraced.

A couple times when the show went to commercial break, Shelton got up out of his chair and went to stand over by Stefani, and the pair couldn’t stop smiling at one another. They even stopped to take a picture together, and also took another picture with fellow coach, Pharrell Williams.

When Stefani and Shelton took the picture with Williams, the crowd cheered again when she wrapped her around Shelton and then squeezed his arm as she walked away.

The moment was captured in a photo by the co-host of  WBIR’s Live at Five and 10News Today, Russell Biven.

At the end of the show, Shelton and Stefani walked off the set together, though they didn’t show any PDA at the time.

Watch ET’s video about all of Shelton and Stefani’s off-camera flirtations below.

We wonder if Shelton and Stefani will ever address their romance on The Voice? In the meantime, we can enjoy watching Levine tease the two of them about it!