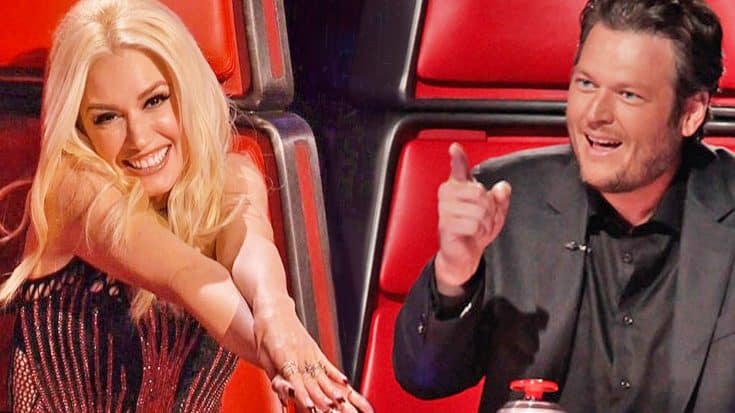 NBC’s The Voice ‘Playoff Rounds’ have begun! And they are already more exciting than ever… especially with Blake Shelton and Gwen Stefani’s new announcement!

Each team is left with 6 superstar-hopefuls, and last night, Team Adam and Team Gwen gave their all in the playoff performances. Each contestant did their best to try and win over their judges, and America’s hearts.

But aside from the stunning performances, we noticed something else. Shelton was clearly feeling protective over his fellow judge, Stefani. Throughout the show, Shelton made sure to compliment Stefani and stand up for her when Adam Levine had something to say.

Could this have something to do with their recent announcement…

It all began when Shelton made a comment about Stefani’s contestant, Korin Bukowski. Shelton complimented Stefani’s great hair styling, as he said,

First of all, I think the last time you cut somebody’s hair on this show, Gwen, they won! I mean I ended up with the person, but they ended up winning.

Stefani giggled as Levine quickly made fun of the smiley couple with a big fake laugh.

Then, when Stefani’s comeback contestant Ellie Lawrence took the stage, Shelton admitted it was his favorite performance of the night!

But things got serious when Levine spoke about Stefani’s youngest contestant, Braiden Sunshine. Levine said of his “Everything I Own” performance, “I think you are spectacular but I thought you wanted to do more than the song allowed.” Shelton quickly jumped in defending Stefani, “You were one of my favorites since the Battle rounds. This wasn’t the over-the-top performance that we are used to, but you are always consistent.“

And by the end of the night Shelton was fired up! When Stefani’s final contestant, Viktor Kiraly, finished his “All Around The World” performance, Shelton said,

I’m going out on a limb here but Team Gwen overall is whipping the crap out of Team Adam. I am just calling it like I see it.

Shelton continued, “It’s fun to see Gwen just whip the crap out of Adam tonight, man. That makes me so happy.“