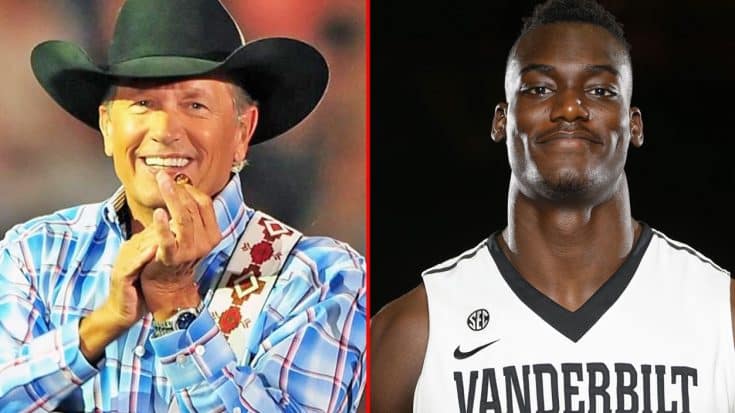 The King of Country, George Strait, is a man of many talents… but who knew English teacher was one of them!

Although indirectly, Strait has made quite the impact on a student at Vanderbilt University… and it’s not for what you’d think.

Djery Baptiste arrived in the United States when he was 15-years-old. The Haitian native came to the states for education purposes, and attended boarding school in Massachusetts before being accepted to Vanderbilt University to play for their basketball team.

Baptiste had to pick up the English language quickly, and decided to learn through story-telling music. And he turned to country music, the best story-telling genre out there!

In an interview with The Tennessean, Baptiste admitted,

Rap and hip hop and stuff like that didn’t tell stories, and they had a lot of bad language, and I didn’t want to learn many of those words. I also had books to learn English, but none of them could teach me like country music did.

Baptiste said he would put his headphones on, listen to country music, and follow along with the lyrics. He may not seem like your typical country music fan, especially because he’s from the Caribbean, which isn’t the most honky-tonk place around. But despite it all, he loves country, and George Strait is his favorite!

I was in America and didn’t know how to say anything in the language, but I thought I could learn it through music. Country music was the best for me, and George Strait is my favorite. So I learned how to speak English by listening to him tell stories in his songs.

The basketball player said that some of his favorite songs include, Alan Jackson’s “Chattahoochee,” Eric Church’s “Homeboy,” and Zac Brown Band’s “Knee Deep.“

But there’s just something about the King of Country that he really connects with. Baptiste said,

It’s just his voice and his tone that I love. I love everything about George Strait. But sometimes my friends are amazed that I love country music. It’s not what most people expect.

He even said that “Check Yes Or No” was his favorite!

We hope the country-loving basketball player gets to meet the man who changed his life one day!

Check out Baptiste’s favorite George Strait song below, “Check Yes Or No“.