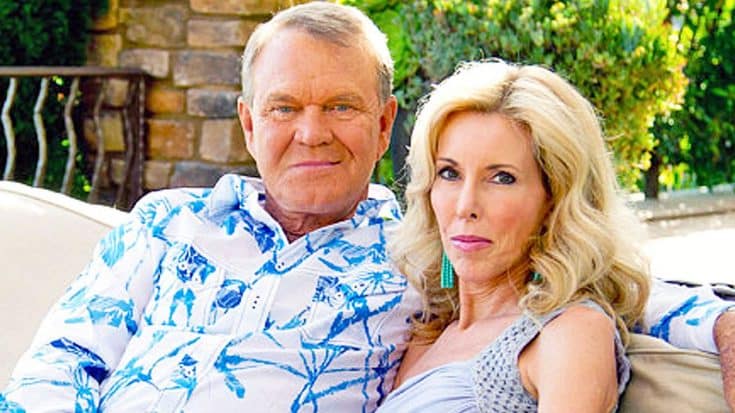 AP via The Telegraph

After Glen Campbell was diagnosed with Alzheimer’s in 2011, his wife Kim took on the role of his primary care giver. As Glen’s condition has deteriorated over the years, Kim has remained strong and stayed by his side, even though it hasn’t been easy.

In a new interview with Guideposts, Kim opens up about the full extent of Glen’s struggles with Alzheimers. She says that at first, Glen didn’t let the disease consume him, and even went on a tour along with their son, Shannon, and daughter, Ashley.

But eventually, Glen’s condition worsened, and he was no longer able to perform. Kim said that her and his other caregivers had to go above and beyond to watch after Glen and make sure he was safe:

“I put child safety locks on our cabinets, but they were no match for his strength. He tried to play with the stove. We used a motion-sensor alarm for when he wandered at night. We were all exhausted from the alarm constantly going off. Glen would put everything in his mouth, from soap to glue, and got aggressive if we tried to wrestle it from him.”

Kim also recalls one particular incident in 2013 when it took an hour to get Glen in the car to take him to the hospital, and another hour to convince him to lay down for a CT scan.

After Glen’s appointment, Kim said the neurologist took her aside and told her that she couldn’t help Glen any more.

“Mrs. Campbell, from what I’ve seen today and from what you’ve told me about his behavior, I can’t believe you’re still trying to manage this at home,” the neurologist said. “It’s clearly not safe for him or you.”

Kim was understandably devastated at this news, but she couldn’t help but wonder if the neurologist was right. She ended up making the decision to place Glen in a care center that specializes in taking care of individuals with Alzheimer’s and other memory-affecting diseases.

It was at the care center that Kim said Glen was finally able to find some peace, and now she feels comfortable knowing that he is receiving the best care possible. When she isn’t out and about raising awareness for Alzheimer’s, she stays with Glen, and continues to help him with day-to-day tasks.

Kim says that even though the disease has taken so much from Glen and their family, they still have lots to be thankful for.

“Alzheimer’s takes so many things from us, yet it cannot take these three: faith, hope and, the greatest of all, love,” she says.

Watch part of Kim’s interview with Guideposts in the video below.

Our thoughts and prayers continue to go out to Glen, Kim, and their family.