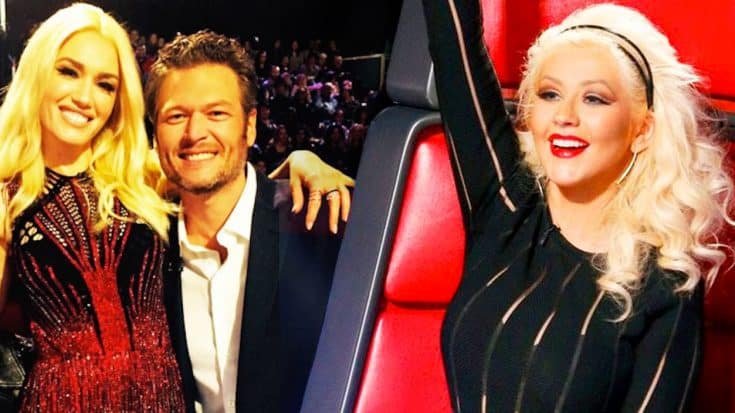 Christina Aguilera has been taking a break from season 9 of NBC’s The Voice, but it doesn’t mean the former coach isn’t keeping tabs on her peers.

During an interview with FOX411 Aguilera spoke out on her 2016 return as a Voice coach, and the budding romance between Blake Shelton and Gwen Stefani.

“The Voice has our first love connection, how awesome is that!” she said. “I know their own situations personally with their divorces and coming from a divorce myself its not easy, its rough on everyone and then you add the pressure of the media and bulls–t rumors, its just nasty and I give them 100 percent of my support.”

She continued to express support for her friends, and admitted she wants nothing but happiness for the both of them.

“They are good people,” she said. “She is a great mom. We’ve known each other for years, way before The Voice and through The Voice I now know Blake. They really deserve happiness. They are two great people and why not, right?”

While keeping tabs on season 9, Aguilera has been working with HopeLine from Verizon. The organization spreads awareness about domestic violence, which is something she is all too familiar with. She admits that she “pretty much grew up on it” so she wants to share her own awareness and experience in order to help others.

Watch Aguilera and Shelton singing “Just A Fool” during a live Voice performance below.

Do you support Shelton and Stefani’s romance? Share your thoughts with us!