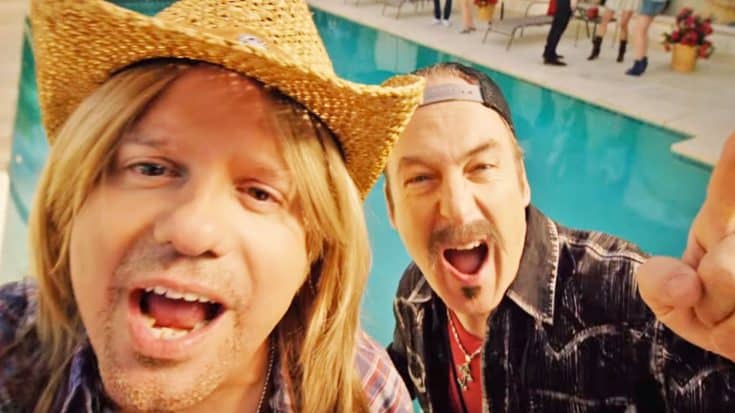 In a strange and unique comedy sketch series, Bob Odenkirk and David Cross use “bro-country” to cross off their grocery list by entrancing fans into running their errands.

Odenkirk and Cross both appear in a new sketch show on Netflix called “With Bob & David”, and this hilarious parody frames them as “Banes & Dunfrey” who represent a take on today’s country music stars.

Taking to the poolside of their mansion, the fictional duo begin running up a list of the ‘few’ things they need for their “simple” life….

The song starts out jabbing at country stereotypes about drinking beer, eating ribs, chewing tobacco, and many more. As it continues on, however, their list gets longer and longer!

“Well you can keep your fancy cheese and wine,
I don’t need nothing special for my good time.
I ain’t high class, just a simple country breed

‘Cause me and the boys we like keepin’ it real
Cracking us a cold brew and kicking up our heels
It’s a simple life, just a few little things I need

A case of Miller or Bud will do,
A rack of ribs and a pack of chew
Cold buds and barbecue, this here’s all I need!”

When they break into the next verse Cross shouts “I hope you’re getting this down!” and a female fan who is driving starts writing their list out!

Check out this hilarious video below for these two mock-country fella’s and their crazy list of “simple things”.