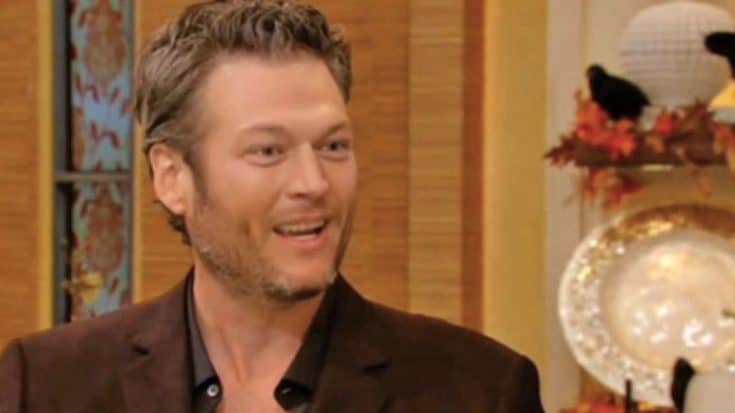 Those hoping Blake Shelton would say something about his relationship with Gwen Stefani during his appearance on Live! With Kelly and Michael are sure to be disappointed. But the Voice coach had lots to say about a variety of other topics, including his Thanksgiving traditions.

“I like to mess around with the turkeys,” Blake says. “Like deep fry ’em sometimes, and I smoked one last year. I got us a smoke house that me and my step dad built next to my house, that’s nicer than my house, and I smoked a whole turkey in there.”

Kelly, knowing about the friendly feud between Shelton and his fellow Voice coach Adam Levine, asks him if the Maroon 5 frontman would be joining him on his tour.

“No,” Blake says, interrupting Kelly before she even finishes asking the question. “It wouldn’t be fun for me. The guy drives me…he’s the reason I drink so much.“

Kelly and Michael played a few clips of Adam on the show from just a couple weeks before, when he took his turn poking fun at Blake.

Adam claims that all the “bald head” jokes Blake made after Adam shaved his head were all his idea in the first place, and that Blake had to actually ask him for some nicknames.

Blake jumped to defend himself, with humor of course.

“Let me tell you something, when you give yourself such a bad haircut, when you realize when you walk out of the place that you look so stupid that you take it upon yourself to start going ‘hey man do you think I look like Dr. Evil?’ he’s laying it out there for me because he already knows.”

Watch Blake’s entire interview with Kelly and Michael in the video below.

We wonder if Adam will have anything to say about Blake’s remarks on the next episode of The Voice?