At 79, Kris Kristofferson Admits His Memory Is Failing, But The Music Remains 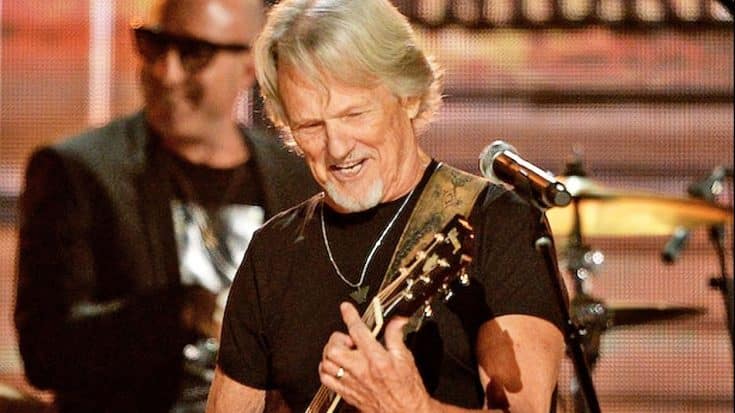 At age 79, Kris Kristofferson knows that he doesn’t have as much energy as he used to, but that isn’t stopping him from doing what he loves.

In a recent interview with the Las Vegas Review Journal, Kristofferson admits that his memory is starting to fail him.

“My brain is so destroyed,” he says. “To me it’s amazing I can still get up and go to the show.”

But as Kristofferson reveals, there is one important thing he can still remember…his music.

“The songs are the last thing to go, I guess,” he says. “But I can remember all the songs.”

Kristofferson says that he’s lucky to have his wife Lisa, who does a good job at helping him with his memory and other things.

“Lisa…is 20 years younger and her brain works,” says Kristofferson.”She does all the work and I watch television and do my gigs.”

Reflecting back on his past, one of Kristofferson’s fondest memories and favorite parts of his career is the time he spent playing in the outlaw country super group, The Highwaymen.

Along with Kristofferson, the group consisted of country legends Willie Nelson, Waylon Jennings, and Johnny Cash:

“I tell you, I look at every Highwaymen picture or album and I can’t believe it. It’s like my biggest heroes, and then the janitor is me. It’s so cool when you get to be friends with your heroes.”

Now that Kristofferson doesn’t have as much energy as he did when he performed with the Highwaymen, he says that he gets a big boost from singing and performing in front of a crowd.

“I’ve been living on it for a long time,” he says. “It’s an exchange of emotion and art and it works. Lifts their spirits and mine too.”

Tune in to the video below for a throwback of Kristofferson performing “Highwayman” with his fellow Highwaymen bandmates, live in 1985.

We’re sad that Kristofferson doesn’t feel as well as he used to, but we’re grateful that he is able to find some comfort through his music.