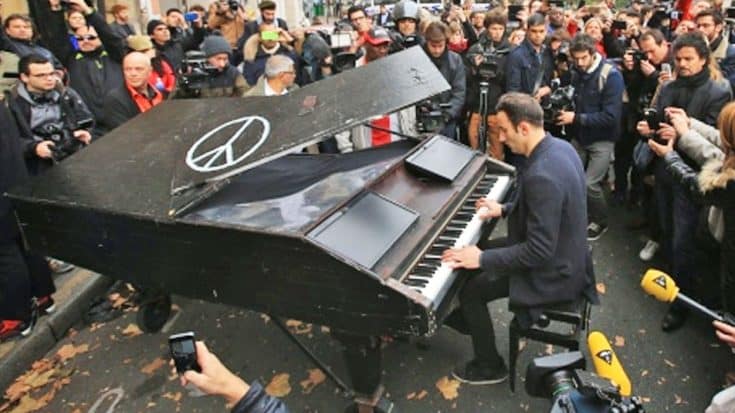 Just days after the attack on Paris, mourners gathered around the concert hall, Bataclan theatre, where over 80 lives were taken on Nov. 13.

The street was filled with flowers, candles and memorials paying tribute to the victims of the terrorist attacks, which was the deadliest attack on the country since World War II.

As hundreds of people stood there, paying respects to the lives lost too soon, one man did something amazing, that no one saw coming.

A mysterious man wearing all black, traveled to the Bataclan theatre with a grand piano attached to his bike. He settled in the center of the mourners, and began playing a heartbreaking tune on the piano, John Lennon’s peace anthem, “Imagine.”

The performance was so powerful, that we’re sure there wasn’t a dry eye in the crowd. With a simple peace sign on his piano it was clear his performance was a tribute as well as a plea for world peace.

In the end, the German musician, Davide Martello, stood up and wiped a tear from his face.

Following the emotional performance, The Guardian reported that Davide said as soon as he heard the news about the attacks, “I just knew I had to do something. I wanted to be there to try and comfort, and offer a sign of hope.“

So he packed his piano and made the 400-mile journey from Germany straight to the center of the attacks.

In a powerful statement, he said,

I can’t bring people back but I can inspire them with music and when people are inspired they can do anything. That’s why I played Imagine.

Davide admitted that the performance was hard for him, and he said, “I got to the end of playing Imagine and just couldn’t carry on. Even if I wanted to it was just too emotional.“

Watch the moving performance below.

Our hearts go out to those affected by this tragedy. #PrayForParis