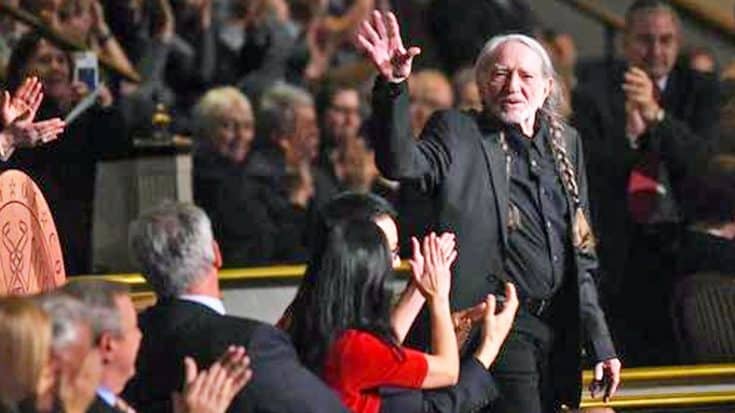 Earlier this year, Willie Nelson revealed via Twitter that he would be the recipient of the Library of Congress’ Gershwin Prize for Popular Song. Nelson is the first country music artist to receive the coveted award.

In a November 18th ceremony, Nelson was honored by both the Library of Congress and many country music artists. Arriving to play in the tribute concert were familiar artists like Alison Krauss, Rosanne Cash, Cyndi Lauper, and Neil Young.

As part of a two-day celebration to honor the 82-year-old legend, Nelson also took to the stage and performed “On The Road Again”. But the concert didn’t end there – in a unique turn of events, his talented sons, Lukas and Micah, joined him to perform “Living in the Promiseland”!

During the celebration Nelson recalled the how prize’s originators had impacted him musically.

“It is a great honor to be receiving the Gershwin award. I have been a fan of Ira and George Gershwin’s music since I was a little guy and in appreciation for the award – and also I wanted to make some great music – I’ve just recorded a complete Gershwin album. It’s called ‘Summertime.’ ”

The Prize is named after the two Gershwin brothers who had amazing songwriting and lyrical talents. They wrote a seemingly countless number of musicals throughout the 1920’s and 1930’s.

Nelson was awarded the prize for his incredible ability to bring the music he has both written and recorded to life in a way that captured the hearts our great nation.

Watch Willie’s acceptance speech and his performance in the video below!