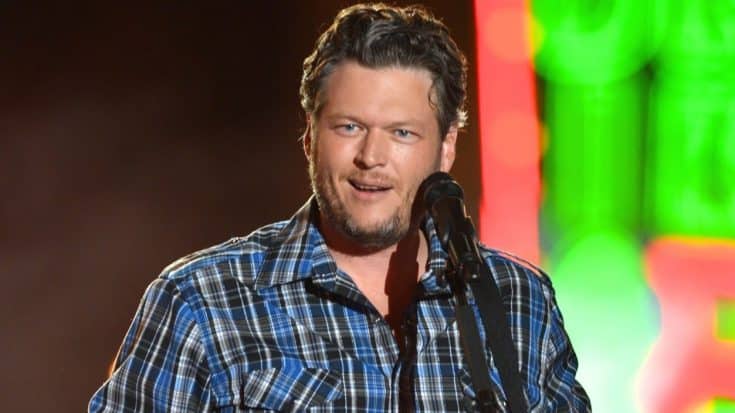 Blake Shelton has never been afraid to call out the tabloids for spreading rumors. He often takes to Twitter to dismiss those rumors, sometimes going on day-long rants against the media.

Sometimes, Shelton’s followers help him out by pointing out things they’ve heard about him in the press that don’t seem true.

After one follower saw an ET article that said they had exclusive photos of Shelton’s new house in Caney Creek, Oklahoma, she felt like she had to bring it to his attention. The ET article says that Shelton’s new home is located about an hour from his hometown of Ada, Oklahoma, and has a garden, private dock, and a balcony.

“Blake gave Gwen her biggest taste of country life,” a friend of Shelton’s told ET. “They ate home cooking at his favorite diners and Blake took her to his new lake house. There’s no Starbucks around here. If she’s still around after that then it must be serious!“

Another source also confirmed that Stefani had come to Oklahoma with Shelton, and that she stayed the night in the new house with him, “instead of [his] marital home, which tells you how much respect he still has for [ex] Miranda [Lambert].“

So what did Shelton have to say about the article? Well as it turns out, they photographed the wrong house.

However, Shelton doesn’t deny the fact that he is building a new house, or that he took Stefani to go see it, so we may just have to wait and see if he addresses those rumors at some point.

You can watch ET‘s video about the house they thought was Shelton’s below and you can also view the exclusive pictures here.

We’re sure Shelton really got a kick out of all of this!