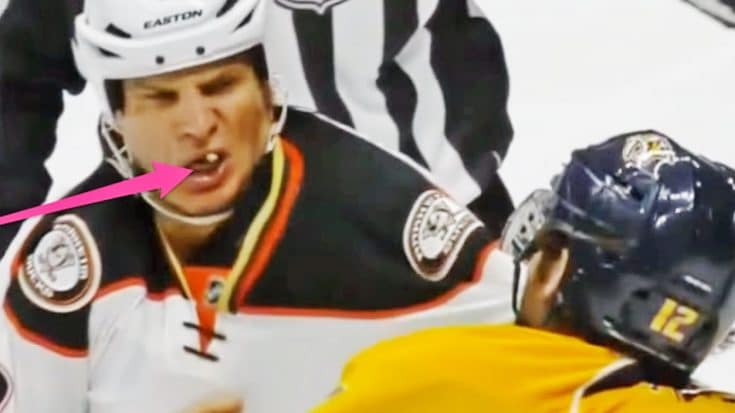 Mr. Carrie Underwood doesn’t mess around. He means business and showed his tough guy side in a recent hockey game brawl.

Just under ten minutes into the game, the gloves came off and a fight broke out between Anaheim Ducks’ Kevin Bieksa and Nashville Predators’ Mike Fisher (Underwood’s hubby).

Bieksa has been known to start a tussle or two, but it looks like he should have held back for this one.

The two start shoving each other around, and in a split second they’re face-to-face throwing punches. Both have their helmets on, but Bieksa’s doesn’t have a face guard. That left him open to what the announcer called “a stiff shot to the face”.

When Fisher threw his fist squarely into Bieksa’s face, dislodging a tooth!

In the video you clearly see the tooth fly out of his mouth and right back in as he’s gasping for air!

Check out Carrie Underwood‘s rough and tumble husband in the video below!