By Jennifer Pernicano on November 19, 2015
Advertisement 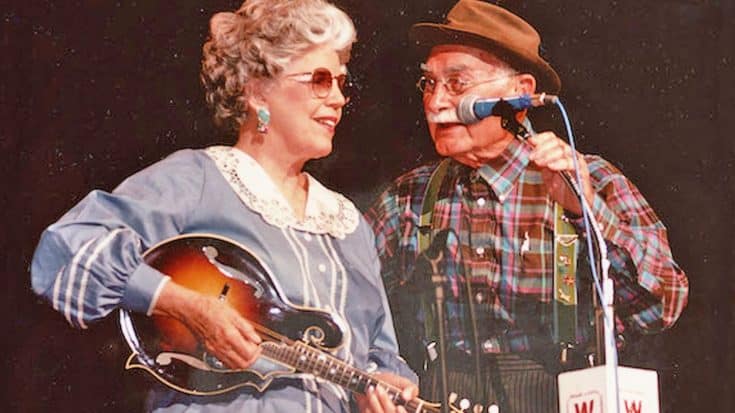 Our hearts are saddened to hear the news of Ramona Jones’ passing on Tuesday, November 17th in Goodlettsville, Tennessee. She was 91.

Born Ramona Riggins in Van Buren, Indiana, she became known as Ramona Jones when she married her first husband “Grandpa” Jones in 1946. They met working at a Cincinnati radio station and moved to Nashville in 1947. Grandpa Jones is a member of the Country Music Hall of Fame and a longtime Grand Ole Opry Member. They were married for 52 years, until his death in 1998.

Ramona’s father taught her how to play the fiddle, and she taught herself how to play the guitar, and mandolin. She competed in many talent contests in high school and won them all. She made her solos debut at the Grand Ole Opry in 1947 and traveled the world with Grandpa. They played for service members on the front lines in the Korean War, toured US military bases in Austria, Germany, and Italy. Ramona and Grandpa at one their earliest Opry performances. (Photo credit: bluegrasstoday.com)

The couple performed on the long-running country-comedy show Hee Haw for 25 years. Grandpa would joke around and play the fool, while Ramona maintained a dignified precense on stage. Their most famous bit was when they would wear cowbells on their feet and hands to play familiar songs. Check out one of their ‘cowbell performances’ below.

Our thoughts go out to Ramona’s family at this time.

Take a look at Ramona showing off her fiddlin’ skills below.