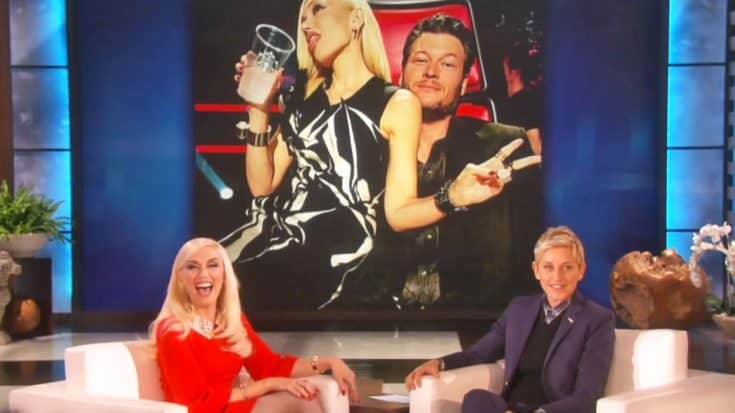 Stefani recently appeared on “The Ellen Show” and opened up about new music, recent heartache, “The Voice” and of course, Blake Shelton.

After talking about her new song and her recent divorce, the show’s host, Ellen DeGeneres, began ‘dancing around’ the very big news – Shelton and Stefani’s relationship.

DeGeneres said, “You seem to have gotten more and more relaxed as the season went on, and more playful as the season goes on…. right? Just trying to dance around the subject.“

Stefani just giggled, admitting that she is definitely in a good place right now.

DeGeneres joked, “But you’re happy and you’re having fun? That’s all I’m saying.“

And, of course, Stefani agreed, “I’m having lots of fun” as a HUGE picture of the two “Voice” coaches appeared on the big screen.

Stefani burst into laughter, as DeGeneres joked, “I don’t know why that’s up there…“

But then things got a little more serious, as DeGeneres said how much she really loves and respects the country star. And a proud Stefani was quick to jump in on the compliments, but not before admitting something huge…

I didn’t even know who he was before I was on the show. Before I was on The Voice I had never heard of him before. I didn’t, I hadn’t. I’m an O.C. girl, what would I know?

But she quickly turned it around, complimenting the country star, “He knows every single 80s song, like he literally is a musical jukebox. He knows everything about music. It’s crazy.“

Putting on her most sincere face, DeGeneres asked, “And he’s a good kisser… or no?“

Stefani wouldn’t crack, she just blushed and giggled as she told the show’s host, “Wow, you’re so awesome!“

Gwen, you’re such a good sport!

Watch the hilarious interview below!