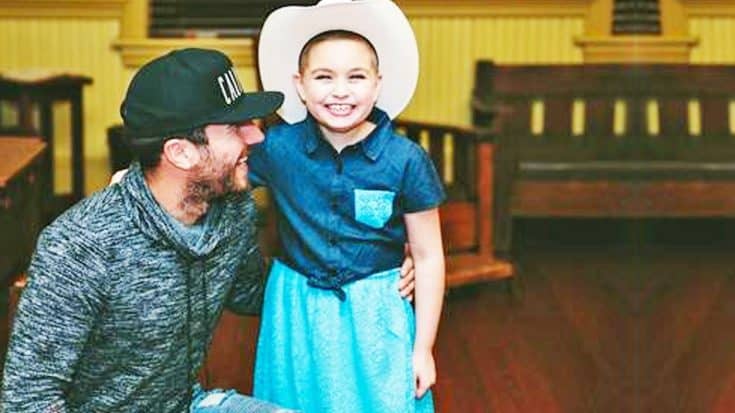 When nine-year-old Cadence Fox was rushed to the hospital with another excruciating headache, nobody fathomed the diagnosis…

Cadence’s mom, Tara had rushed her daughter to a medical center in nearby Macon, GA where she told them she “wasn’t leaving until they did some kind of brain scan to determine what was causing the headaches.” Doctors discovered that Cadence had two cancer tumors on her brain and recommended she do four rounds of chemotherapy treatment and six weeks of radiation. The treatments had to start immediately for Cadence, and unfortunately that meant she would miss a concert she had been waiting for: Sam Hunt. Even though little Cadence had to miss the Atlanta concert, a miracle was in store for her. The Brandy Angel Foundation got word of Cadence’s plight and set out to bring some cheer to the youngster’s day.

“Tara told me how Cadence has never once complained about her treatments and the first time they hooked up her chemo treatment Tara began to cry at the thought of poison going into her daughter’s tiny body,” said Angel. “Cadence looked at her mom and said ‘mom it’s ok, it’s JUST CHEMO.’ These little warriors never cease to amaze me with their strength and heart.”

Brandy and her foundation sourced three tickets to the nearest Sam Hunt concert in Morgan County for Cadence and her family, but they didn’t stop there. Cadence also received red-carpet treatment with a local salon donating make over services! “She smiled so much all day and felt so pretty and special,” Angel said. “To be able to bring so many loving, compassionate people together to make a little girl’s dreams come true is one of the most beautiful experiences of my life.” Cadence and her family got to meet Hunt backstage and to say she was ecstatic is an understatement! Click here for the full Fox 5 news story!

Check out Cadence’s journey below in a video she created for a support page on Facebook!