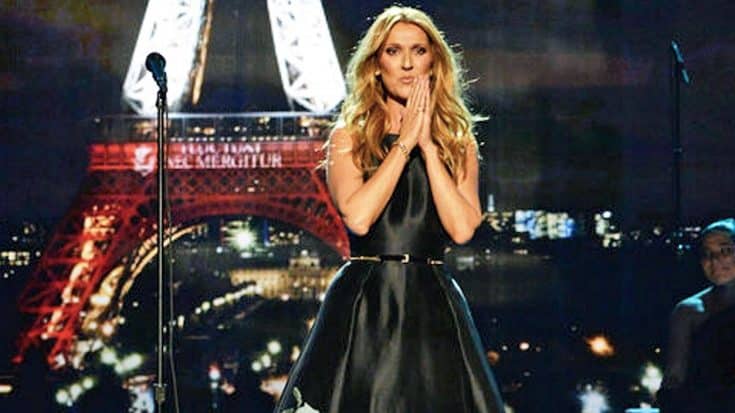 Nine days after terrorist attacks in Paris claimed the lives of 130 people, the stars at the American Music Awards paid tribute to the victims and showed their support for France.

Of the 130 people killed, 89 were killed in the Le Bataclan music venue, a place where many of the artists at the AMA‘s have performed before.

Immediately following the attacks, many of country music’s biggest stars took to social media to express their sympathies for the people of Paris, including Craig Wayne Boyd, Kacey Musgraves, and Lady Antebellum‘s Hillary Scott.

Jared Leto, the lead singer of the Los Angles rock band 30 Seconds to Mars, took to the stage to start the AMA‘s tribute to Paris. He reflected on his band’s experience of playing in the Bataclan earlier this year before he moved into his remembrance of the victims.

“Like some of you here, we had friends and former colleagues there that night,” Leto said, referring to  Thomas Ayad, a marketing manager at Mercury Music Group/Universal who was killed during the attacks on the Bataclan.

Even though the tribute was to Paris in particular, Leto made sure to emphasize how important peace is for the entire world, not just one country:

“Tonight we honor the victims of the unimaginable violence that has taken place this year in Paris and around the world,” he said. “France matters. Russia matters. Syria matters. Mali matters. The Middle East matters. The United States matters. The entire world matters and peace is possible.”

Following Leto’s speech, Canadian singer/songwriter Céline Dion took to the stage to perform Edith Piaf‘s “Hymne A L’amour,” which has been a popular French song for many years.

Standing in front of a backdrop with images of popular Paris landmarks, such as the Eiffel Tower and the Arc de Triomphe, Dion’s voice soars through the venue, and the emotion is clear in every word she sings.

The crowd is extremely touched by Dion’s performance, with the camera zooming in close to show Luke Bryan‘s wife, Caroline, with tears in her eyes.

Dion’s performance escalates to a stunning, emotional finish, and we’re sure there wasn’t a dry eye in the room once she was done singing.

You can watch Dion’s moving tribute to Paris in the video below.

Our thoughts and prayers continue to go out to Paris during this time.