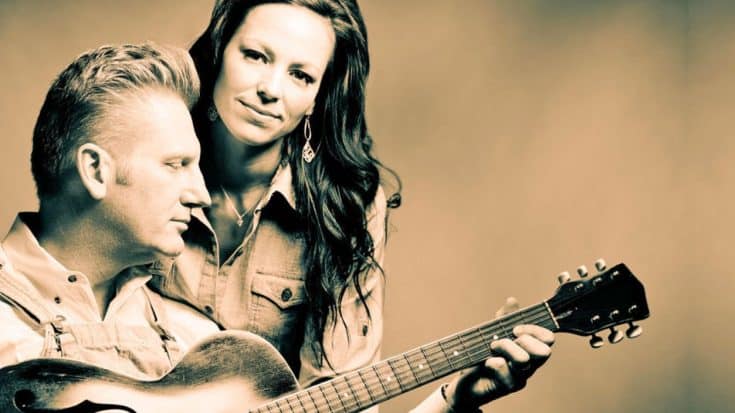 Sometimes something as small as a snowflake can bring so much happiness.

This past weekend, that’s exactly what happened to Joey Feek of Joey + Rory.

In the most recent post from Rory Feek’s blog, This Life I Live, Rory shared an incredibly heartbreaking story about his wife’s battle with cancer.

It all began when the couple’s neighbor sent a picture of his daughter, Scout, riding a horse at the Center for Courageous Kids. She suffers from Loeys-Dietz syndrome and attended the Kentucky camp which brings fun and joy to children with disabilities. He messaged the couple the photo, saying, “Scout can’t wait until Indiana joins her at camp.“

Something about that message hit a soft spot in Joey, and she immediately broke down, admitting something she never wanted to say. Rory wrote,

And then through her tears, she said the words….

…the ones I knew she felt, but she had never said before.

…the words that are the hardest, most-difficult part of all that she, and we, are going through:

“I want to raise our baby”, she cried, and her tears fell harder…  “I want to be the one to teach her”.

Rory said his wife was inconsolable, until she saw something beautiful… a snowflake!

Through her tears, Joey saw the first snow of the season, and maybe the last snow of her life. With a huge smile across her face, Joey told her husband, “I didn’t think I’d get to see snow again. If this is the last snow I ever see, thank you Jesus… thank you.“

Like manna from Heaven.  God sent us just what we needed…  just when we needed it.   He always does.

On Valentine’s Day 2016, Joey + Rory plan to release an album filled with hymns that are important to the couple. Rory calls it “Joey’s Album” and says it is something she’s always wanted to make. He said,

This record means so much to her.  It is the songs that are the most important to her.

Below, Joey sings the hymn “It Is Well With My Soul” as snow falls around her childhood home in Indiana.