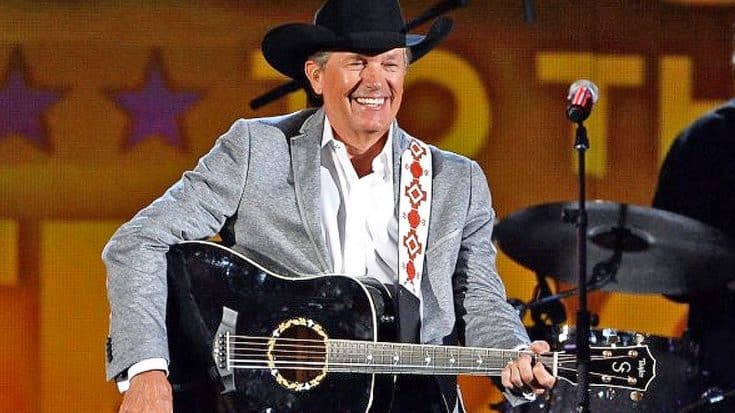 Ever since his debut in 1981, George Strait has been singing his way into our hearts.

Whether it be his buttery smooth vocals, his relatable lyrics, or his good looks, fans all over the world have gone crazy over The King of Country.

He has recorded 60 Number 1 hits, which is more than any artist in any genre, has sold over 70 million records, and is considered to be the main artist to bring country music back to its roots and away from the pop country era in the 1980s.

With 13 multi-platinum, 33 platinum and 38 gold albums, Strait has lots of wisdom to share and we were ready with our notepad.  Here are 10 life lessons that we’ve learned from King George.

1. Love can happen when you least expect it

If you’ve given up on love altogether, you should listen to “Blue Clear Sky“, which is an anthem about how when love seems unfindable, you might find it, out of the blue!

Here she comes a walkin’ talkin’ true love,
Sayin’ I been lookin’ for you love,
Surprise your new love has arrived,
Out of the blue clear sky.

Fun Fact: George was hesitant about recording this song. He thought the lyrics should’ve been “clear blue sky.” The song writer, Bob DiPiero, said “blue clear sky” is a line from Forrest Gump.

2. Your parents’ love is unconditional

“Love Without End, Amen” tells a story of a boy who has been sent home from school for fighting, expecting his father to punish him. Instead, his father tells him that fathers always love their sons, no matter what. It’s a true sentiment because once this boy becomes a father, he fully understand what his dad once told him.

“The Chair” narrates a story of a man who uses the pick-up line, “Well excuse me, I think you’ve got my chair” to a woman at a bar. Over the course of the conversation, the talk turns more intimate and the woman drives home with the man.

Well excuse me, but I think you’ve got my chair,
No that one’s not taken, I don’t mind if you sit here,
I’ll be glad to share.

Oh I like you too and to tell you the truth
That wasn’t my chair after all.

“Ace in the Hole” teaches us to hope for the best and prepare for the worst. With everything n life, including money, friends, or anything life throws at you, make sure you don’t show everyone everything you’ve got.

You’ve got to have an ace in the hole.
A little secret that nobody knows.
Life is a gamble, a game we all play,
But you need to save something for a rainy day.

5. With the right person, long distance relationships can work

Even if you are miles apart, Strait’s “Carrying Your Love With Me” teaches us that if you’ve got the right person, and enough love, long distance relationships can most certainly work. He describes a relationship where he carries the love of his significant other with him where ever he is.

Fun Fact: The music video was Strait’s first in two years, and he didn’t make another one for two more years.

6. Learn from the mistakes of others

“I Hate Everything” is about a man who hates everything because his now ex-wife leaves him for another man. He tells the narrator about his marital problems and the narrator is going through a tough time with his own wife. After seeing the pain this man was in, he calls his own wife and apologizes for everything.

I hate my job, I hate my life and if it weren’t for my two kids I’d hate my ex-wife
I know I should move on and try to start again
But I just can’t get over her leaving me for him
Then he shook his head and looked down at his ring and said I hate everything

Fun Fact: “I Hate Everything” was the lead single from his compilation album, 50 Number Ones. It reached the top of the Billboard charts in October 2004.

7. Don’t miss the important things in life, big or small

In “The Breath You Take” Strait teaches us that big or small, every moment with your loved ones is a special one. From little league games, to birthdays, to births, Strait reminds us that it is important to be present and experience all you can.

“Troubadour” is a timeless classic that tells a story of a man who is content with what he’s accomplished, but isn’t defined by his age. Although a lot of his work was done when he was younger, he truly will live forever in what he accomplished.

Sometimes I feel like Jesse James
Still tryin’ to make a name.
Knowing nothing’s gonna change what I am.
I was a young troubador
When I wrote in on a song.
And I’ll be an old troubador when I’m gone…

Fun Fact: This song is Strait’s 86th charted single of his career.

9. Miracles are all around us

After watching the miracle of his child being born, the narrator of “I Saw God Today” takes a walk and sees little “miracles” like a flower growing out of a crack in the sidewalk. As the day goes on, he keeps seeing things he normally sees everyday, but now, to him, they are all miracles.

His fingerprints are everywhere,
I just look down and stop and stare,
open my eye and then I swear,
I Saw God Today

10. The last goodbye is the hardest one to say

Saying goodbye is one of the hardest things to do, but knowing it’ll be the last time makes it even harder. “The Cowboy Rides Away” is a story about a man who is finally saying goodbye to a failed relationship.

We’ve been in and out of love and in-between.
And now we play the final showdown scene.
As the credits roll a sad song starts to play,
And this is where the cowboy rides away

Oh the last goodbye’s the hardest one to say.
This is where the cowboy rides away.

Fun Fact: This is the last song Strait sang at his final concert ever on June 7, 2014 at AT&T Stadium, which set a worldwide record for attendance. 104,000 people watched this cowboy ride away.