Video Proof That Team Blake Is One Adorable, Dysfunctional Family 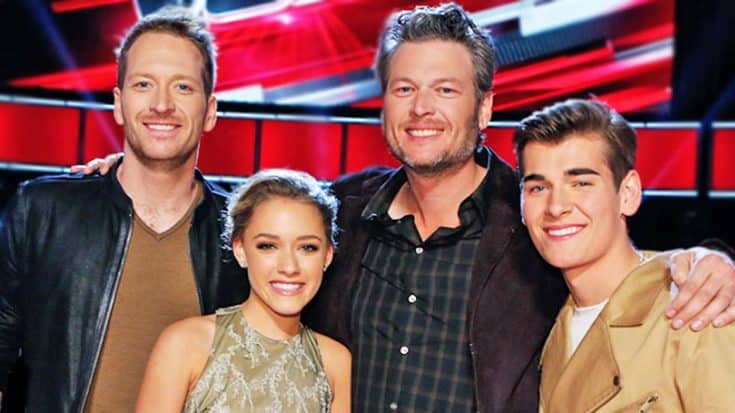 The three remaining members of Team Blake on The Voice have grown incredibly close since they started their journey together.

As revealed in a behind the scenes clip from The Voice, Barrett, Zach, and Emily Ann are more than just friends, they’re like a little, dysfunctional family.

Since Zach and Emily are both the same age, they’ve grown particularly close, but as Barrett reveals, they have a love-hate relationship with one another.

“Zach and Emily are like two peas in a pod, and they’re really like brother and sister,” Barrett says. “They nit-pick at each other and nag each other. They’re just so cute.”

Emily Ann says that her and Zach get on each other’s nerves so often, that they once had to make a promise to be nice to each other:

“We decided that we were going to be nice to each other for a full day. So we shook hands on this and everything, it was legit. Probably two seconds later he said something that really ticked me off and I was like ‘I don’t even like you. I don’t even know why I’m here.'”

If Emily Ann and Zach are the brother and sister duo of Team Blake, Barrett is definitely the dad. Zach says that even though Barrett is older than him and Emily Ann, he is able to connect with them perfectly.

“Ever since I met Barrett, he’s always been the guy to help me out,” he says. “I feel like Barrett understands teenagers a lot.”

In the clip, Barrett, Zach, and Emily Ann also do some impressions of their fellow Team Blake members, with Barrett making fun of Zach for talking about all the attention he’s getting from female fans.

“So many chicks are tweeting me right now,” Barrett says, trying to do his best impression of Zach.

As much as they like to poke fun at one another, Team Blake loves spending time together, grouping up to do everything from mini-golf to working out in the hotel weight room. But as Barrett points out, Zach constantly likes to question if he “even lifts.”

You can watch more of Team Blake’s antics and impressions in the video below.

We wish Barrett, Emily Ann, and Zach the best of luck as they continue on in the competition!