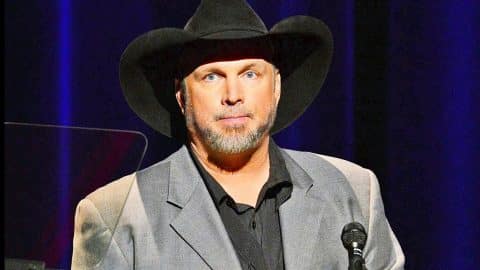 After 10 years together, it’s hard to imagine Garth Brooks with anyone else but Trisha Yearwood. But Yearwood is not the first lady in Brooks’ life, he had actually been married once before.

Brooks met his first wife, Sandy Mahl, in college and the two married 1986. They went on to have three daughters together, and at the same time, Brooks became a major country music star. The marriage was not necessarily a happy one for Brooks, but as he says in an interview with Country Fancast, he was determined to make it work:

“Being married, it’s gotta be right. This is who you went to college with and you were married in front of God and your family and everybody. Still, at the end of the day, There comes that time where you’re looking at the rest of your life and going, ‘How do you want to live it?’”

Part of the reason Brooks felt a lack of a connection to his wife was because of Yearwood herself. Brooks met Yearwood for the first time a little over a year after marrying Mahl, and he says he was swept away by her.

“I felt that feeling like when you just meet your wife,”  Brooks told talk show host Ellen DeGeneres.

Despite his feelings for Yearwood, Brooks still tried to make his marriage last, but after announcing his retirement in 2000, the marriage ended a year later. Mahl has never remarried, and is a successful businesswoman and dedicated wildlife rehabilitator.

Yearwood and Brooks started dating shortly after the end of his marriage, before the two of them tied the knot in 2005. Now, the duo is considered to be one of country’s greatest power couples, and Yearwood has been touring with Brooks since he made his comeback and took off on his World Tour. Brooks says that he has found a happiness with Yearwood that he never knew existed.  “I never knew it could be like this,” he says. “I never knew that every day you could feel like this.”

You can hear Brooks talk more about his relationship with Yearwood in his interview with Ellen below, where he also talks about raising his three daughters.

We’re glad that Brooks has finally found some happiness in life, and we wish him and Yearwood many more years of happiness together.