By Kevin Blue on November 23, 2015
Advertisement 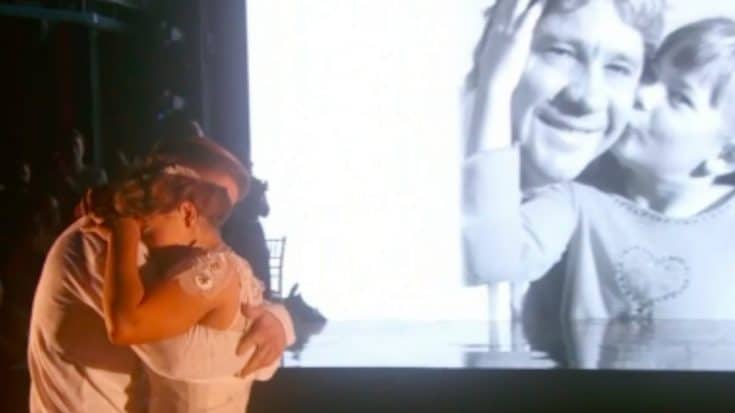 Since the first night she stepped onto the ballroom floor, Bindi Irwin has been the fan favorite to win the coveted mirrorball trophy on this season of Dancing With the Stars. Her sweet spirit and amazing talent have endeared her to millions of viewers week after week.

During Monday’s (Nov. 23) finale performance, Bindi and her partner Derek Hough gave a freestyle routine dedicated to her late father, Steve Irwin, that brought the audience to tears and reminded us once again just how much we love Bindi.

The couple’s simple and elegant routine was choreographed around Leona Lewis’ “Footprints in the Sand.” At the end of their number, Bindi and Derek walked over digitally-projected sand while the footprints of her dad appeared between them. As the dance concluded, a photo of young Bindi kissing her father on the cheek appeared on a large screen. Viewers later learned that the photo ending was a surprise from Derek to Bindi.

There wasn’t a dry eye in the room as Bindi clung to Derek and wept before facing the judges where they were awarded a perfect score.