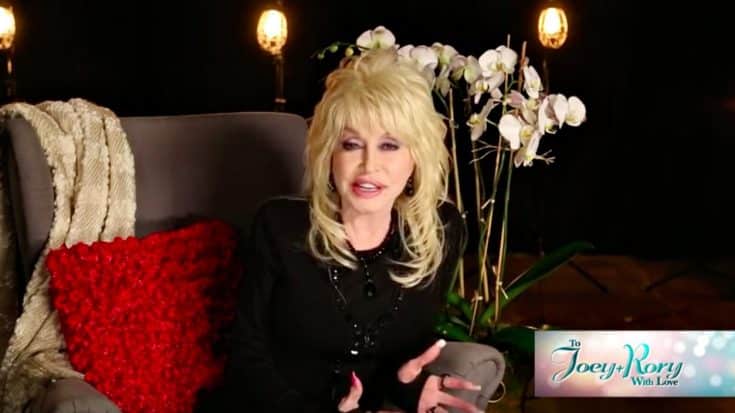 Joey Feek of Joey+Rory has reached millions with her cancer battle. Her husband, Rory, has candidly shared their story on his blog causing a resurgence in their popularity.

On Thanksgiving Day, RFD-TV aired an all-day marathon of the duo’s television show, The Joey and Rory Show. The marathon was followed by a special segment titled To Joey+Rory With Love and included messages from fellow country singers including Reba McEntire, Dolly Parton, Wynonna, and more.

“Joey and Rory, I’ve loved you for years,” Parton said in the special. “I’ve had all your records, and Joey I just wanted you to know that I really appreciate the fact that you’ve often done my songs, talked about me at different times, and I’ve heard that you’re a big fan.”

“Well, I want you to know that I appreciate that, and I want you to know that I’m sorry you’re not feeling good. But I know we have something in common, we both believe in a higher power, we believe that through God, all things are possible. So, you keep praying, and I’ll keep praying for you. I just think that you’re wonderful, and I know God is proud of you. I just wanted to take a chance and say thank you for loving me, and I’ll be loving you.”

Reba McEntire and her band shared a video message from their recording studio in Nashville.

“Joey and Rory, we just want to say our hearts, our thoughts, and our prayers are with you at this time, and we love you with all our hearts,” McEntire said.

Tanya Tucker also had a special message for Joey and Rory. Tucker called cancer a “cruel, awful thing” and said she knows how hard Joey’s diagnosis has been on her and her family.

“I hate to see that you’re going through this, but I’m glad you’re here for Thanksgiving, and have your family around,” Tucker said. “That’s what’s most important, having family and friends around you, and I send my heartfelt love.

One of the most emotional messages came from Lee Greenwood who said, “We’re backstage at the Opry, at the Ryman. Wish you were here. You know, life has some interesting turns and twists, as I know you’re going through a really tough time. Just remember that God has lots of miracles in his back pocket. Anything’s possible. Hold onto each other and love each other, and know that we all care so very much. God bless you and your family.”

Joey Feek was first diagnosed with cervical cancer in 2014, three months after she gave birth to daughter, Indiana. After undergoing a radical hysterectomy and rounds of chemotherapy and radiation, the disease returned and had spread to her colon.  In October, Joey and Rory were told that there as nothing else that could be done for her. Shortly after, Joey entered hospice care at her childhood home in Indiana.

Watch To Joey+Rory With Love below and leave your well wishes for the couple on our Facebook page.