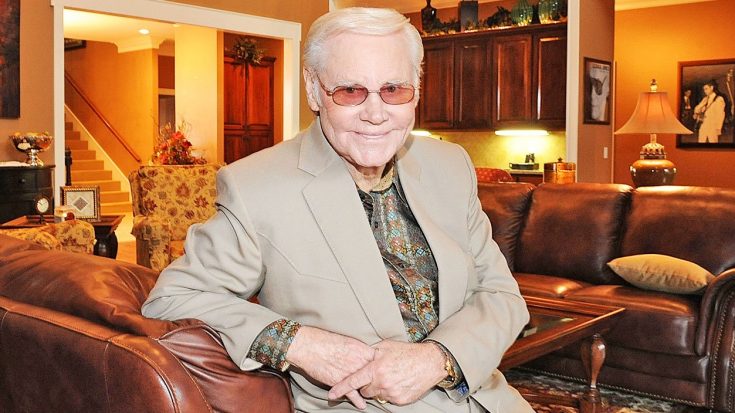 Known by his nickname “The Possum,” George Jones served as the voice behind some of the genre’s most memorable songs. His heartbreaking hit, “He Stopped Loving Her Today,” is often referred to as the best country song of all time.

Fans of Jones know all about his many hit songs, awards, and accomplishments. They also know about his various relationships, including his high-profile marriage to fellow country star Tammy Wynette.

Jones lived quite the eventful life, which was full of surprising moments and facts that you may know nothing about. For example, did you know he broke his arm at an extremely young age? Or that he once sponsored an unusual product?

Well if you didn’t, then you’re about to learn about both of those things and six other surprising facts from Jones’ life!

1. He Broke His Arm Right After He Was Born

Jones was born in Saratoga, Texas on September 12, 1931 to his father, George Washington Jones, and his mother, Clara. Jones was a heavy baby, and weighed in at a whopping 12 pounds.

But there’s another reason Jones’ birth wasn’t a smooth delivery. According to an article published by CMT, while the doctor was helping with the delivery he accidentally dropped Jones, and broke one of his arms. Ouch!

2. He Served In The Military

Many country music stars joined the military before they found their claim to fame, and Jones was one of them. He enlisted in the Marine Corps and was stationed in San Jose, California.

Jones remained in San Jose for the duration of his two years of service before he was discharged in 1953. He started recording music after he got out of the Marines, and released his debut record “No Money in This Deal” in 1954.

3. He Recorded Some Rockabilly Songs

During an interview with Billboard in 2006, Jones spoke about a period of his career that he wished he could forget. With the popularity of Elvis Presley on the rise in 1956, people put pressure on Jones to record a few rockabilly tracks of his own.

Jones didn’t want to sing rockabilly, but he agreed to do a few songs, though only if he could use a pseudonym. The name he chose for his rockabilly days was Thumper Jones, and over the years he tried to distance himself from those recordings as much as possible.

“I didn’t want my name on the rock and roll thing,” he told Billboard.

4. One Of His Greatest Hits Was Penned By Another “Big” Artist

Jones’ first number one hit was “White Lightning,” which he released in February 1959. The song was so successful that it went on to become one of The Possum’s most well-known works.

Although Jones was also a songwriter, another “big” star wrote his first chart-topper. Few people know that person who wrote the words that Jones hiccups through in “White Lightning” was none other than J.P. Richardson, also known as “The Big Bopper.”

“The Big Bopper” was one of the most popular artists of his time, but his life was cut short when he died in a plane crash along with Buddy Holly and Richie Valens on what later became known as “The Day the Music Died.”

5. He Wanted His Most Iconic Song To Sound Like A Kris Kristofferson Tune

When Jones was first introduced to what would later become his signature song, he hated it. Although “He Stopped Loving Her Today” left a huge impression on all who listened to Jones’ recording, it almost didn’t happen because of how much Jones disliked the tune.

The documentary about Jones’ life, called Still the Same Old Me, discusses his initial feelings about “He Stopped Loving Her Today.” As the documentary reveals, Jones hated the melody of the song so much that he refused to learn it. His producer, Billy Sherrill, said that Jones often sang the song to the tune of Kris Kristofferson‘s “Help Me Make It Through the Night” instead, and recalled an exchange between the two of them about it:

“I said ‘That’s not the melody!’ and he said ‘Yeah, but it’s a better melody.’ I said ‘It might be—Kristofferson would think so too, it’s his melody!’“

Jones eventually recorded the song with the intended melody, and he developed an appreciation for it in later years.

6. He Co-Wrote A Big Hit For Alan Jackson

Alan Jackson has the highest level of respect for Jones, and paid tribute to him with an emotional performance during his funeral service at the Grand Ole Opry in 2013. You may not know this, but Jones actually wrote one of Jackson’s many chart-topping hits.

Jones co-wrote “Tall, Tall Trees” with fellow country star Roger Miller and released his recording in 1958. Miller released a recording of his own in 1970, but neither of them turned the song into a single.

In 1995, Jackson became the first to release “Tall, Tall Trees” as a single, and he took his version of the tune to the top of the charts in both the U.S. and Canada. It was Jackson’s 11th number one hit, and further secured his position as one of the leading artists in country music at the time.

7. He Once Sponsored A Dog Food Line

It’s not unusual for celebrities to create their own products or serve as a spokesperson for something. In the 1990s, Jones served as the sponsor for an unusual product…his own line of dog food. Called George Jones Country Gold Dog Food, “The Possum” spoke about his new product in a short commercial which featured him holding a pair of Golden Retriever puppies.

But Jones wasn’t cut out for the dog food business, and the line was eventually phased out. His sausage line however, was doing well when his friend and fellow country star Trace Adkins attended his birthday party. In an interview with Rare Country, Adkins recalled how he made light of Jones’ failed venture into the dog food business:

“I just leaned over to him, and I said, ‘George, I know what you did with all that dog food you couldn’t sell. I know you put it in that sausage.’ He just started laughing and spitting cake. I’ll never forget that.”

Just as many of today’s artists cite Jones as their favorite artist and source of inspiration, Jones also had a role model in the country music community. Out of everyone else in the business, Jones always had the greatest sense of admiration for Merle Haggard.

“It was one of the greatest compliments of my entire life when George Jones said I was his favorite country singer,” Haggard recalled in an article he wrote for Rolling Stone following Jones’ death. Jones and Haggard went on to become close friends, and Haggard had even planned to attend what was supposed to be Jones’ final concert, but “The Possum” passed away before that date came.

There’s no denying that Jones’ life was full of interesting moments and people such as Haggard. Which one of these things surprised you the most? Do you know any other little-known facts about him?