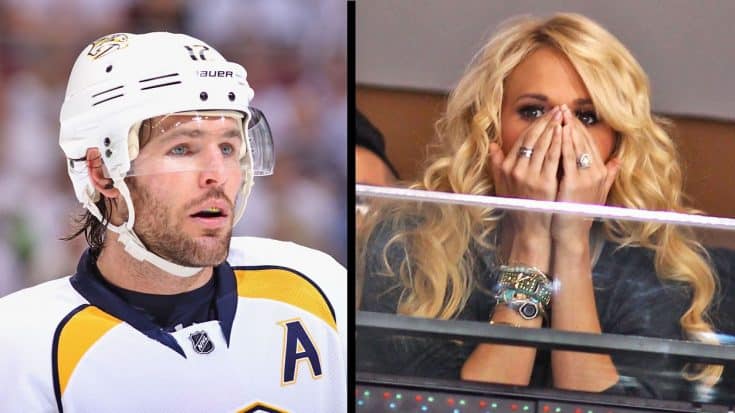 Carrie Underwood’s husband isn’t feeling his best after the Nashville Predators 5-2 win over the Arizona Coyotes.

The victory was exciting for the hockey team, but Mike Fisher left the ice with an injury to his lower body. There was no official update on his injury after the game, but one fan caught his unfortunate fall on camera and posted to Twitter.

According to The Tennessean, Fisher lost his balance and his right side slammed into the boards after being pushed by the Coyotes forward, Martin Hanzal. Afterward, Fisher appeared to be hurt, unable to put much weight on his right leg and needed assistance returning to the locker room.

Fisher’s teammate and Predator team captain, Shea Weber commented on the injury after the game.

“I’m not going to make any assumptions because I don’t know how serious it is, but he’s obviously a great player for us, a big leader up front,” Weber said. “He gives you about everything. He’s got grit, he’s got skill and he can score. Definitely a guy that we’re going to miss, unless he’s back next game and then we don’t have to worry about it.”

We’re sure that fall gave Underwood a scare! Hopefully the injury isn’t as serious as it looks, and we’ll keep our fingers crossed for a speedy recovery.