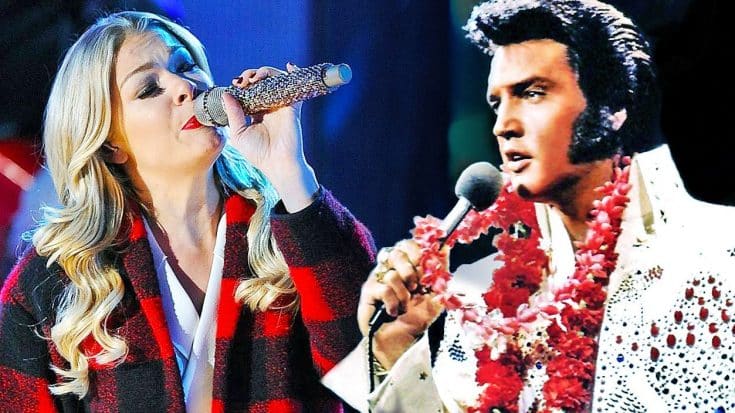 During the Christmas season, many enjoy listening to their favorite Elvis Presley Christmas songs to get them in the holiday spirit. The King’s versions of Christmas classics such as “Blue Christmas” and “Silver Bells” remain some of the most popular versions of those songs to date.

Another one of Presley’s most-beloved Christmas songs is the cheery classic, “Here Comes Santa Claus.” Presley first released his version of the song in 1957 on Elvis’ Christmas Album.

Years later, Presley’s rendition of “Here Come Santa Claus” has earned its spot as a holiday favorite, and was later included on his posthumous album Elvis Presley Christmas Duets.

For the album, Presley’s original vocals were mixed with new instrumentals to create remastered versions of his iconic Christmas songs. In addition, modern country and gospel singers recorded their own vocals for some of the songs, which were then combined with Presley’s vocals to create a handful of duets.

In the remastered version of “Here Come Santa Claus,” Presley’s duet partner is none other than LeAnn Rimes. Rimes’ sweet voice is perfect for the track, and we couldn’t think of a better person to sing this song with Presley!

For most of the song, Presley and Rimes take turns singing, but there are a few moments when their voices blend together, and it really does sound like they’re singing at the same time.

You can listen to Presley and Rimes’ remastered duet of “Here Comes Santa Claus” below, along with Presley’s original version of the song.

What do you think of Presley and Rimes’ duet?