By Jennifer Pernicano on December 3, 2015
Advertisement 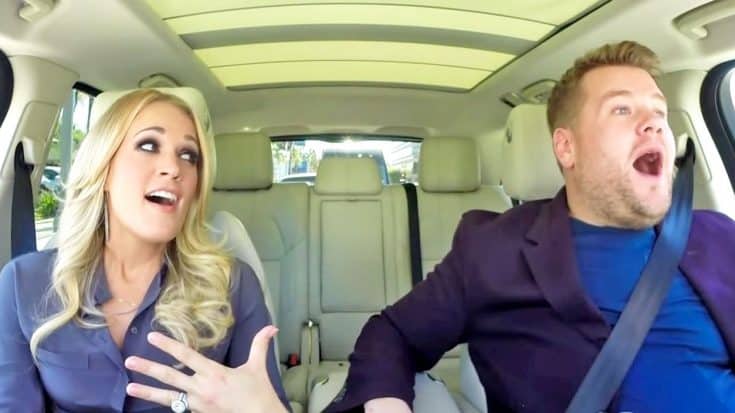 It’s official: Carrie Underwood is one of the coolest and sweetest EVER.

Host of The Late Late Show, James Corden debuted another hilarious addition of ‘carpool karaoke’ with the country music superstar. They drove around Los Angeles, California singing some of Underwood’s most famous tunes, and even stopped into a boot shop for some of the best country attire.

Ultimately their carpool journey led to an unsuccessful but entertaining trip to the boot store. After trying on a vest, hat, and boots Corden realized the price of this country attire was beyond his budget. Underwood did her best to convince the talk show host that the $800 boots were a wise investment, but he wouldn’t budge.

The two harmonized their way through some of Underwood’s top hits including, “Jesus Take the Wheel”, “Before He Cheats,” and “Smoke Break.” In between duets, Corden asked Underwood about her husband, hockey, and her ability to hold a note for an abnormally long time (which she couldn’t get through without laughing).

One of the best moments was when he asked about her husband, and the Nashville Predators forward, Mike Fisher. “Do you get worried when he has a fight?”. To which Underwood replied, “Have you seen his latest fight? she said with a smile. “He knocked a guys tooth out, it was pretty hot.”

'This cow has been milked as much as it can.' https://t.co/7i8AVi3rx7 pic.twitter.com/XULmbglwaD

Watch the entire video below, we promise you won’t be disappointed. You don’t want to miss Carrie Underwood rocking out to Wham!