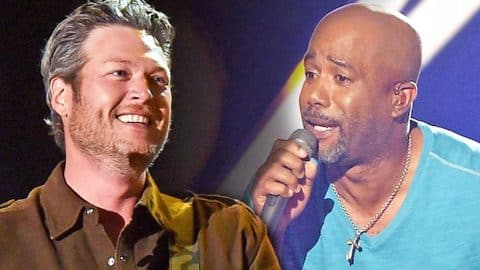 With a total of 24 chart-topping singles, it comes as no surprise that Blake Shelton is one of the biggest artists in country music today. Because of his influence on country music, Shelton was awarded a CMT Artist Of The Year Award for 2015.

During the awards ceremony, Darius Rucker honored Shelton with a medley of his biggest hits. Rucker was also joined by Cassadee Pope and RaeLynn for the performance of the medley, which made it extra special, since both of them got their start on Shelton’s team on The Voice.

The trio performed Shelton’s “Neon Light” and “Sangria,” both of which were released as singles from his album Bringing Back The Sunshine and became number one hits. In addition to being big hits in the U.S., both songs were also number one hits in Canada.

During their performance, Rucker takes over singing the main vocals to the songs, while Pope and RaeLynn sing the background parts, harmonizing with one another and Rucker.

The camera moves to focus on Shelton several times during the performance, and it’s clear that he’s really enjoying it, as he smiles while nodding his head and singing along.

At the end of the performance, Rucker welcomes everyone to the show, and points at Shelton in the crowd, “We love you Blake,” he says.

You can watch Rucker, Pope, and RaeLynn’s performance honoring Shelton in the video below.

This performance is so fun, you won’t be able to stop yourself from grooving along to the beat!