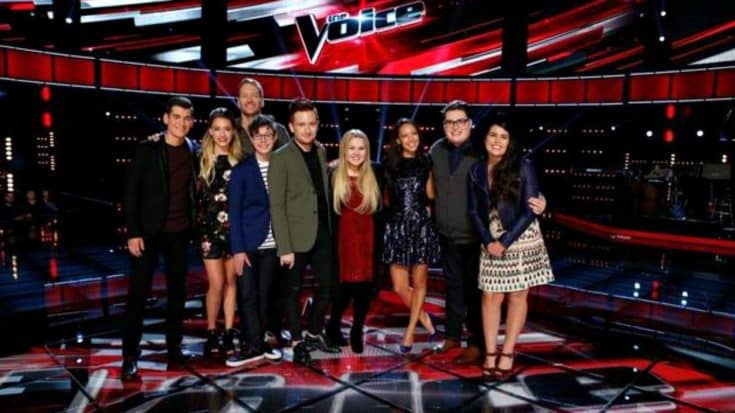 In the most intense and exciting episode so far on Season 9 of ‘The Voice,’ 9 semi-finalists were whittled down to 4 finalists. It was a sad night for 5 hopefuls, but they ended their ‘The Voice’ journey with a guest appearance by Dolly Parton.

Throughout tonight’s live episode, host Carson Daly announced the names of the contestants that were moving forward in the competition. Jordan Smith was the first to have his name called and it wasn’t a huge surprise since Smith’s performance of an Adele hit topped the iTune charts and the singer received more votes than anyone in ‘The Voice’ history.

The second singer moving on to next week’s finals is Team Blake’s Emily Ann Roberts who performed Dolly Parton’s ‘9 to 5’ during last night’s semi-final episode.

The contestants were given a brief break from the tension of elimination when Dolly Parton herself took the stage to sing ‘Coat of Many Colors,’ much to the delight of Blake Shelton who sang along and gave the legendary singer a standing ovation.

Following Dolly’s performance, it was back to business as Carson Daly revealed that Barrett Baber, also a member of Team Blake, was moving on in the competition.

Of the 6 remaining contestants, 3 were sent home on the spot and 3 were given the opportunity to sing for a chance to be in the finals.  Jeffery Austin, Madi Davis, and Zach Seabaugh took the stage for what could be their final ‘The Voice’ performance. Following each of their songs, America had five minutes to decide who would move on to the finale. America voted, and Jeffery Austin was named the fourth and final ‘The Voice’ finalist, leaving Pharrell Williams without any team members moving into the finals.

To recap, the four finalists for Season 9 of ‘The Voice’ are:  Jordan Smith (Team Adam), Emily Ann Roberts (Team Blake), Barrett Baber (Team Blake), and Jeffery Austin (Team Gwen). They will go head to head next week for a chance to be crowned Season 9 ‘The Voice’ champion and receive a recording contract.

Watch the moment Jeffery Austin found out that America had chosen him to move on to the finals below.